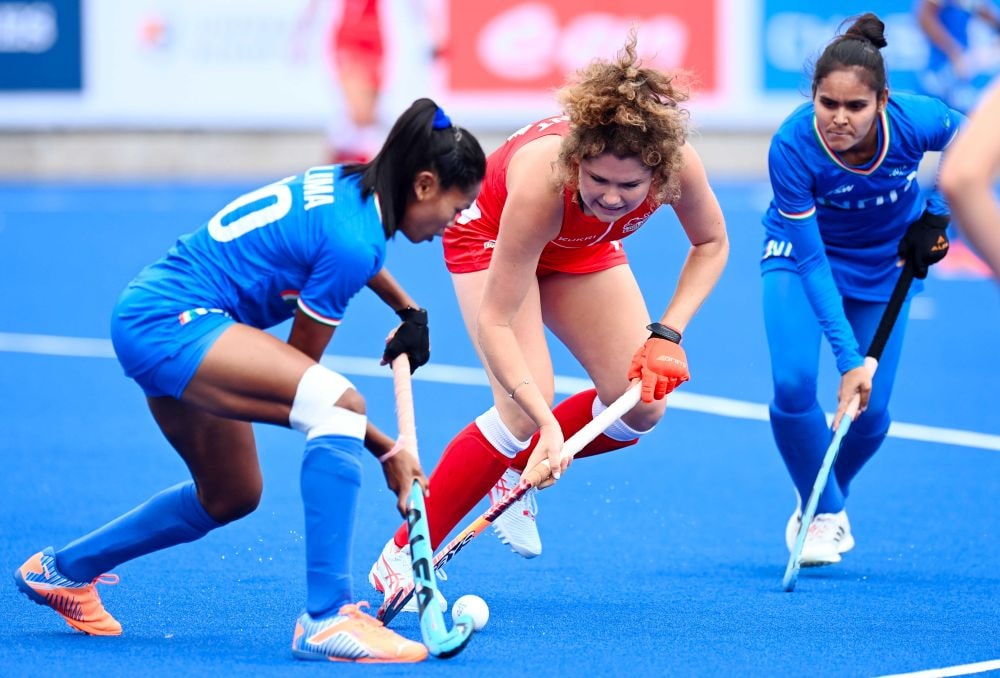 India suffered their first defeat in three outings as they went down to England 3-1 in the Women's hockey tournament at the Birmingham Commonwealth Games on Tuesday,

Giselle Ansley (3') Tess Howard (40'), Hannah Martin (53') scored a goal each for the winners while, Vandana Katariya (60') reduced the margin r for the losers.

England played to plan and controlled the proceedings most of the time and kept the rivals under control. Indian forwards made some very few incisive moves but could not captalise on them .

England attacked and defended well while girls in blue lacked that type of energy and stamina.

The hosts made their intent very clear from the start as they earned back-to-back Penalty Corners in the second minute of the first quarter. Giselle Ansley converted the second Penalty Corner to make it 1-0 in the third minute.

Soon after, Salima Tete made a fantastic run in the right flank, but she couldn't find the back of the net. In the 12th minute, Tete produced a fantastic ball and Vandana Katariya tried to tap the ball into the goal, but the English Goalkeeper Madeleine Hinch pulled off a great save. '

India earned a Penalty Corner in the final minute of the first quarter; however, Gurjit Kaur couldn't find the equaliser.

Monika took a shot in the opening minutes of the second quarter, but unfortunately the ball went over the crossbar. Indians made another circle penetration in the 20th minute, but the English defence foiled that attack .

The Indians kept trying to find the equalizer, but England managed to hold on to their lead at the end of the first half.

Elena Rayer made a remarkable run through the centre in the opening minutes of the third quarter, but Udita pulled off a fantastic tackle .  England rode on the momentum and made another circle penetration in the 38th minute, but the failed to cut through the crowded defence.
However, Sophie Hamilton produced a terrific ball and Tess Howard deflected it into the goal in the 40th minute to help England increase the lead 2-0.

India obtained a couple of Penalty Corners in the dying minutes of the third quarter, but they couldn't find the back of the net.

Tete took a shot in the 48th minute, but Goalkeeper Hinch successfully pushed the ball away from the goal.

In the last minute of the match, India obtained a Penalty Corner and Vandana Katariya tapped the ball into the goal to reduce the margin (3-1)