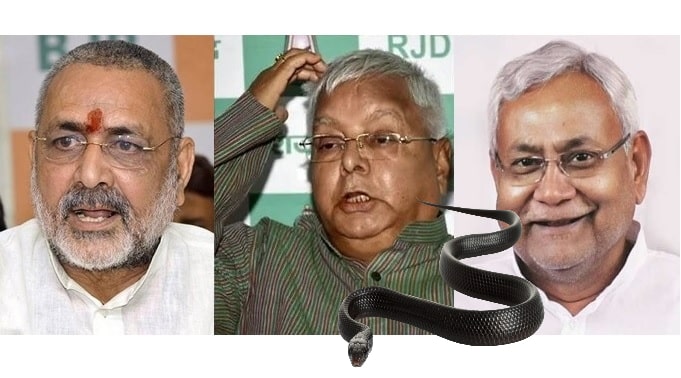 Old statements and Tweets are the talks of the day. As Nitish Kumar is joining hands with the RJD founded by ex-CM Lalu Prasad Yadav, BJP leader Giriraj Singh today searched his old tweet.

In this tweet  Lalu Prasad Yadav had called Nitish Kumar a snake.” The snake has entered your room”, Giriraj Singh Tweeted just before Nitish Kumar takes oath as CM of the Mahagatbhandhan today.

The tweet mentioning Nitish Kumar as a snake was dated in 2017 when Nitish Kumar had broken away from the Mahagathbandhan.

So was the view of Lalu Prasad saying just like a snake sheds its skin, Nitish Kumar sheds his alliance and takes a new one every two years. "Any doubt?" Lalu Prasad Yadav had tweeted.

Now, while Lalu Yadav has not tweeted on Nitish Kumar’s latest move to quit as CM of the NDA to become CM of the Mahagatbhandhan, Giriraj Singh's reply to the tweet on the snake tweet viral as many social media users commented on it on Wednesday, a day after Nitish Kumar walked out of the alliance of the NDA and staked claim to form the government of the Mahagathbandhan -- an alliance of seven parties.