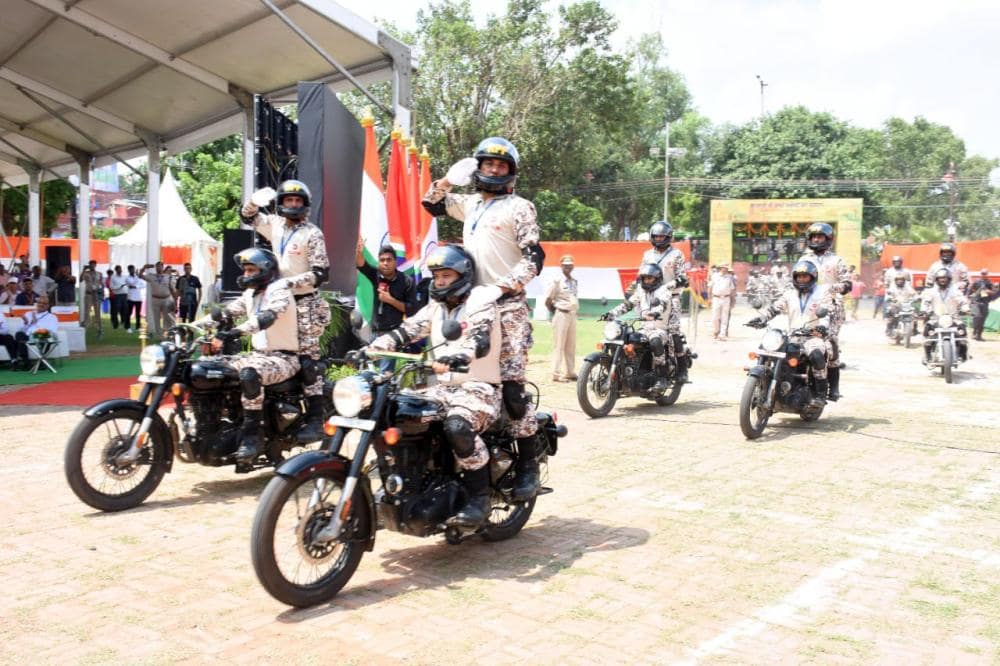 Two days before the 75th Independence day, the Red Fort in Delhi witnessed a grand show on “आज़ादी के अमर शहीदों का सम्मान”, as well as the “Flag-in” Ceremony of the All India Motorcycle Rally organised by the Railway Protection Force.

It was on August 13. Union Minister of Communications, Electronics and IT and Railways, Shri Ashwini Vaishnaw presided over the function and honoured family members of 6 Amar Shaheeds of the freedom struggle hailing from all parts of the Country.

In addition, the Minister “Flagged-in” RPF’s motorcycle rally consisting of 75 motorcycles in, one of its kind event. It was organised by the Railway Protection Force on the premises of the iconic Red Fort.

As part of Azadi ka Amrit Mahotsav, the RPF also launched a 75 -day long public outreach programme across the nation.

Leveraging its pan-India reach and strong unitary command and supervision, RPF has been carrying and implementing a slew of initiatives in remote parts of the country to spread the message of patriotism and nationalism with an appeal to the youth to come together for nation-building in the Amrit Kaal starting this year till 100th year of our freedom in 2047.

The public outreach programme started in June 2022 and concluded in the grand ceremony held at the Red Fort today, on the 13 August 2022.

In his welcome address, DG/RPF Shri Sanjay Chander dwelt in brief about some of the activities undertaken by RPF as part of AZADI KA AMRIT MAHOTSAV.

A nationwide tree plantation programme was initiated with the objective to plant 7.5 lakh saplings. Till yesterday, we have planted about 6 lakh saplings, and our responsibility does not end there, we will continue to nurture them till they can support themselves.

During the scorching summer, RPF personnel participated in providing drinking water to the thirsty. The operation of Jal Sewa has been undertaken at more than 7189 locations across the country.

To reach out to the public, trucks fitted with video walls were rolled out to showcase the sacrifices of freedom fighters, efforts being undertaken in nation building and make the people aware of various social and safety issues.

During the celebrations, more than 800 freedom fighters or their next of kin, in various parts of the country were felicitated by organizing simple functions in schools or public buildings like panchayat bhavan, local library etc.

RPF personnel participated in Run for Unity at various locations and logged an excess of 3 lakh kilometres spreading the message of unity and integrity.

Notably, a motorcycle rally by RPF personnel was flagged off from 75 locations across the country on 1st July. They further congregated at 4 iconic locations, having significance in the history of the freedom struggle and national unity.

From there, they moved towards the capital, Delhi. After having traversed the length and breadth and travelled more than one lakh kilometres, they were received on August 13 in a “flag-in” ceremony at the Red Fort by the Minister of Railways. The event took place in presence of Mrs. Darshana Vikram Jardosh, Minister of State for Railways and other Dignitaries.

Speaking on the occasion, Minister of State, Railways Smt. Darshana Jardosh, stated that India is going forward in great strides under the leadership of the PM. The freedom struggle was not only the domain of the males, it has left behind many examples of women like Rani Lakshmibai who made the ultimate sacrifice for the independence of India.

Further, she pointed out that the women staff of RPF have done excellent work in providing protection to women passengers. She gave a number of fact sheets on this issue to substantiate her opinion.

Speaking on the occasion, Minister of Railways Shri Ashwini Vaishnaw, honoured the family member of the freedom fighters. He also sanctioned a reward of Rs 5 lakh for the RPF bikers and pillion riders.

The families of the martyrs present at the function appeared to have motivated RPF men and women to do their best in the service of the nation and realize their pledge of SEWA HI SANKALP HAI.