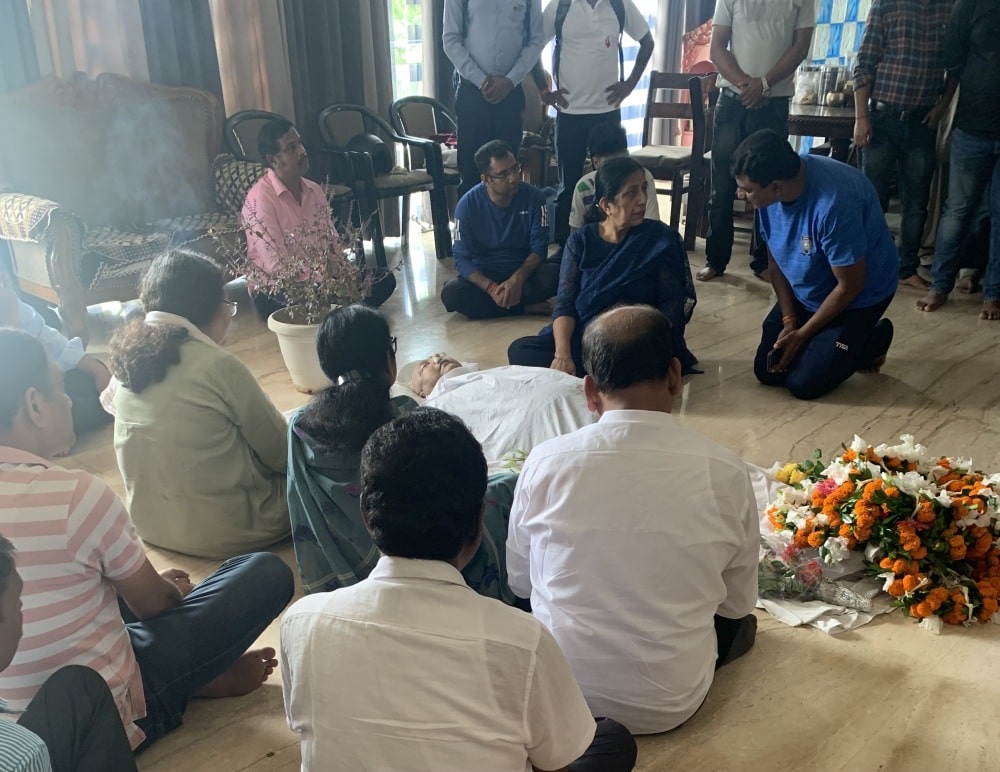 *Amitabh Choudhary’s Wife Nirmala Kaur, relatives and friends sitting around his body on the fourth floor of his residence in Ashok Nagar Ranchi. Photos by Manoj Prasad

Inquiry revealed that after suffering a severe heart attack, Amitabh was taken to the Santevita hospital.A security guard at his Ashok Nagar residence said, he had had a morning bath,prayed, and then strolled on the green grass inside his house when he suddenly could not stand. He was rushed to Santavita where he was declared dead shortly after he arrived there.

The body was brought back to his Ashok Nagar home. His wife Nirmala Kaur and daughter landed in Ranchi from Delhi.

In a verbal message, his family wants that his cremation to take place in presence of his so. on Wednesday, after his arrival,who is flying in from Bengaluru.

As IPS officer, he held several posts including SSP, Ranchi.He was also Manager of the Indian Cricket team from 2005 to 2009.

In 2013, he took VRS from IPS. In 2014, he also entered politics and contested the Ranchi Lok Sabha election as a candidate of Babulal Marandi’s party, but could not win it.

On the basis of his incredible administrative records, Chief Minister Hemant Soren appointed him as Chairman of Jharkhand Public Service Commission.He held the same post till he reached age of 62 years and as such he remained chairman until July 5.During his short tenure he was successful in organising and declaring the JPSC Civil Service Examinations without any controversy.

Most importantly, Choudhary is credited to have got the world class JSCA International Cricket Stadium in Ranchi. The central Pavilion of this stadium is Amitabh Choudhary pavilion.

No wonder why in the world of cricket, he has become a martyr. Even in the Indian Police Service, he was rated as ten pointer.

According to the latest reports, the time and venue of the last rites are yet to be finalised.