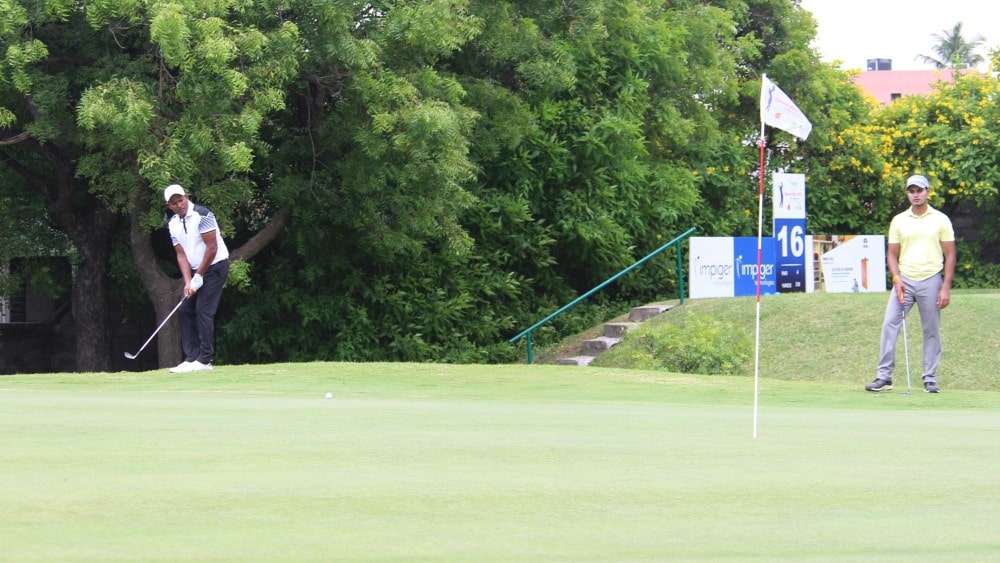 Sri Lankan N Thangaraja carded five-under 67 and with a one-stroke lead at 16-under 200 emerged the sole leader at the end of the third and penultimate round of the Chennai Open Golf here on Thursday.

Gurugram 's Manu Gandas' fired a closing eagle that enabled him to a 68 keeping him in contention at 15-under 201 at the Rs. 40 lakh event.

Chandigarh's Abhijit Singh Chadha was also in pursuit following a day's best of 66 and another closing eagle that took his total to 14-under 202 and placed him third.

N Thangaraja (66-67-67), the overnight joint leader, continued to be one of the top contenders after the penultimate round as a result of his tenacious 67 which featured an eagle, five birdies and two bogeys. He had a slow front-nine where his best effort was a super second shot on the fourth that left him a seven-feet eagle conversion.

Thanga, a three-time winner on the PGTI, then picked up four birdies on the back-nine with some great putting and a good chip to strengthen his claim to the title.

“It was my putting all the way today. A strong back-nine today gives me confidence heading into the final round. I’ve played so well after a long time so just want to keep it going. I’ve adapted well to the conditions here as I encounter similar conditions in my home country Sri Lanka,” said Thangaraja, who last won on the PGTI in 2018.

Manu Gandas (68-65-68), the joint halfway leader, slipped one spot on day three after an up and down round. Manu, a three-time winner on the PGTI, was even-par for the day through 12 holes before he rolled in some long birdie putts on the 14th and 17th and set up an eagle with a terrific second shot on the 18th.

“It was a mixed bag for me today. I didn’t hit my wedges well and made some errors in the middle of the round but I was happy to finish well. The key in round four would be to repeat what I’ve done so far.” he said

Abhijit Singh Chadha (71-65-66) moved up one spot to third place thanks to his 66.  His quality approach shots and wedge-play brought him birdies on the first four holes and the eighth hole for an outstanding front-nine. He dropped a bogey on the 15th but more than made up for it with an eagle on the 18th courtesy a brilliant second shot.

“I managed myself really well today and it was a good day for me on the greens. I’ve done well on the front-nine so far so want to keep that going in the last round,” he said

Karandeep Kochhar (68) from Chandigarh occupied fourth place at 12-under 204 while Bengaluru’s Khalin Joshi (70) was a further shot back in the fifth position.

Ravi Kumar of Chandi mandir produced a 66, the day’s joint best, to be tied sixth at nine-under 207 along with Bangladesh’s Badal Hossain (67).

The two local professionals who made the cut, S Prasanth and Sandeep Syal, were placed tied 38th at even-par 216 and tied 51st at four-over 220 respectively.