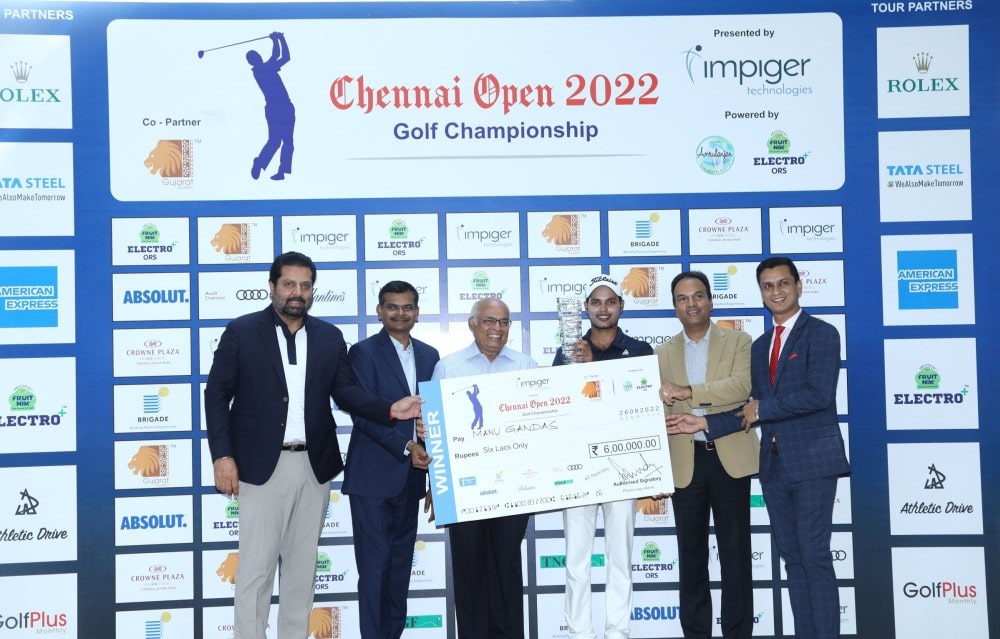 Gurugram’s Manu Gandas fired a dazzling five-under 67 on the last day and with a total of 20-under 268 won the Chennai Open by four-shot at TNGF Golf Course here On Friday.

This was Manu's fourth PGTI trophy and it earned him a cheque of Rs. 6,00,000.  Sri Lanka's N Thangaraja took second place at 16-under 272 following his final round effort of 72.

Manu (68-65-68-67), lying overnight second, one shot off the lead, began the final day with a chip-in birdie on the first hole. He then cut out the errors and kept himself in play to make pars all the way till the eighth. Manu added his second birdie on the ninth where he rolled in a 10-footer after a poor chip.

On the back-nine, Manu missed some up and downs but managed to extend his lead with some excellent putting, making birdie conversions from a range of 20 to 30 feet on the 13th and 16th holes. He finally found the par-5 18th green in two and two-putted for a closing birdie to capture his third title of the year.

“The most important things for me over the last one year have been identifying my shortcomings and the consistency with which I’ve followed my processes. Importantly, I took a month off from the game during the mid-season break to fully recover from my injuries and that really helped at the end." he said

“My driving and tee shots were the best aspect of my game this week. Today my wedge shots were not great but they kept me in play. I did well with the longer putts in the final round. I didn’t look at the leaderboard on day four but instead just focused on my target which was a total of 20-under. I finally managed to achieve it.”

N Thangaraja (66-67-67-72), the overnight leader by one shot, made a poor start with three bogeys on the front nine but came roaring back with three birdies on the back-nine to claim the second position.