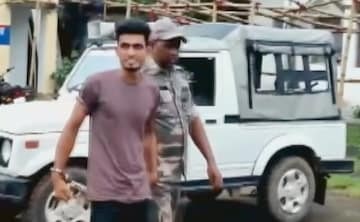 *No grief, No regret. A smiling Shahrukh after he was arrested by the police in Dumka, Jharkhand

Dumka is on the boil. Despite prohibitory orders imposed there following massive protests over the death of a class XII girl who was set on fire by her alleged stalker because she had rejected his romantic advances.

Hundreds of people took out processions in the town of Dumka. Many shops remained closed. The protesters were demanding “ hang him till death.”

What added fuel to the fire was a smile on the face of the accused who had no sense of grief on his face. Worse, he even reportedly threatened to “kill” the family members of the victim.

The case has turned political because the victim and the accused are from different communities. Opposition BJP has slammed the Chief Minister for "neglecting" women's safety.

The state has said the case will be fast-tracked. Chief Minister Hemant Soren announced that a top cop (Additional Director General of Police level) will supervise the case; he also announced Rs 10 lakh as monetary compensation for the family of the victim.

The victim Ankita, who succumbed to injuries after being set ablaze by the accused named Shahrukh for allegedly turning down his proposal, was cremated on Monday morning.