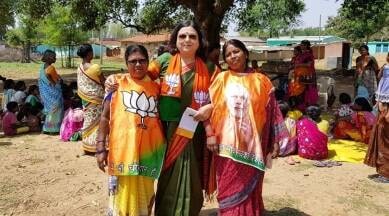 She deserves what she got today when the cops nabbed and arrested Seema Patra.

Patra, now-suspended member of the BJP women’s wing is facing the charge of torturing and exploiting her domestic help.She who is wife of retired IAS officer, and stays in a house in Ashok Nagar in Ranchi,was suspended by the BJP after a video went viral showing her as a culprit who ruthlessly tortured her domestic help.

Soon, the social media and JharkhandStateNews flashed it after FIR was filed at Argora Police station in Ranchi.She has been booked under the SC/ST Prevention of Atrocities Act, and various sections of the IPC.

She who is expected to be sent to jail on judicial custody, has alleged that she was “ falsely implicated” in the case.