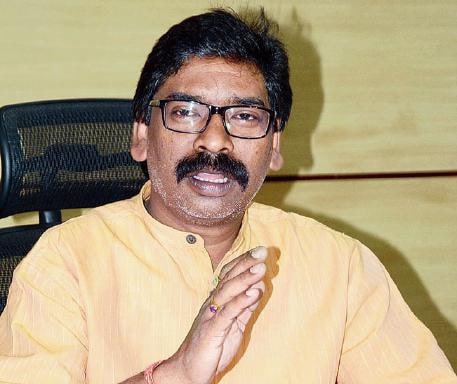 Amid the possibility of Governor Ramesh Bais declaring cancellation of his membership of the Assembly any time now onwards, Jharkhand Chief Minister Hemant Soren is set to seek a vote of trust on Monday.

Facing unprecedented challenges in his political career, Soren has moved ahead smartly by working, signing files and making announcements of several developments and welfare schemes for people, including getting the cabinet’s approval to provide the old pension scheme which was discontinued in 2004.

His move has been welcomed by hundreds of employees of the state government across the state. Some of them had poured bouquets of flowers on him.

Against this backdrop, JMM party leader, Soren, has expressed his willingness to move a motion of confidence to prove his majority. This was evident from a letter sent to the MLAs by the Assembly Secretariat.

In case, Governor Ramesh Bais does not announce cancellation of his Membership of the Assembly and makes him ineligible to contest an election, Soren is expected to win the trust vote and thereby will continue to hold the office of the CM.

Moreover, the delay in making public his decision pertaining to the Election Commission’s reported recommendation to withdraw Hemant Soren’s Membership of the Assembly, Governor Ramesh Bais has evoked widespread criticism in public.

Though the EC’s decision has not yet been made officially public, there is a buzz that the poll panel has recommended the chief minister’s disqualification as an MLA.

The ruling UPA has asserted that disqualification of the CM as an MLA will not affect the government, as the JMM-Congress-RJD coalition enjoys an absolute majority in the 81-member House.

In a joint statement on August 28, the ruling JMM and its allies Congress and RJD accused Bais of encouraging political horse-trading by “deliberately delaying" announcing the decision.