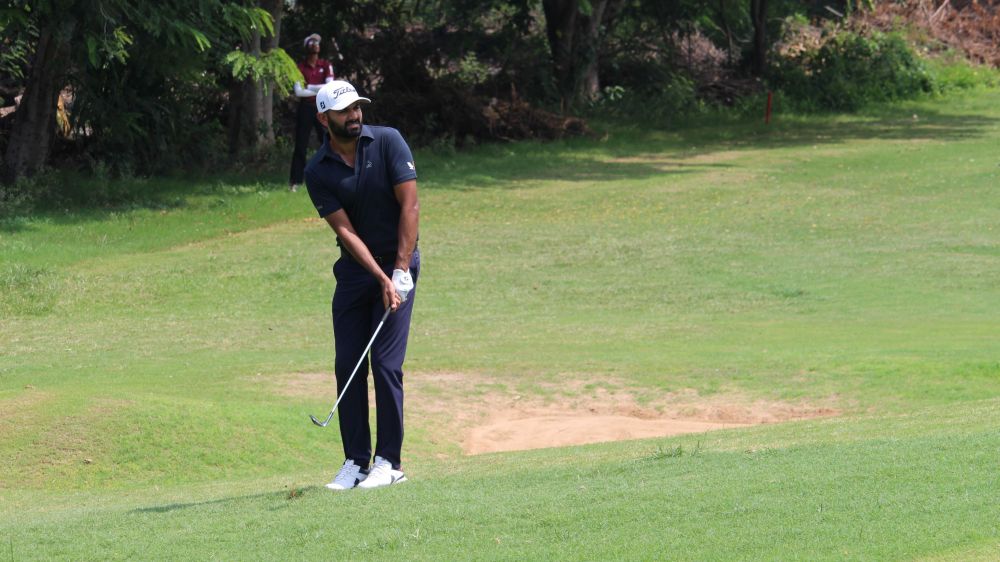 Chandigarh's Abhijit Singh Chadha carded five-under 65 to regain the lead in round three of the Jaipur Open at the Rambagh Golf Club here on Friday.

Om Prakash Chouhan (67-66-65) of Mhow, who has made five chip-ins in the tournament so far including two in round three, played an error-free round of 65 to gain four spots and end the day in second place at 12-under 198.

Bangladesh’s Jamal Hossain fired the day’s best score of 63 to move up 15 spots to tied third at 11-under 199. Bengaluru’s Mari Muthu (67) was also in tied third place. Halfway leader Amrit Lal of Chandigarh hit three over par 73 and slipped to tied seventh place at nine-under 201.

Local professional Girraj Singh Khadka was tied 28th at three-under 207. Amateur Manoviraj Shekhawat, the other Jaipur golfer to make the cut, was 50th at six-over 216.

Three-time PGTI winner Abhijit’s day was highlighted by his three long birdie conversions from a range of 15 to 30 feet on the second, fourth, and 18th as he did well to negotiate the tricky greens. He also set up three tap-in birdies with his exceptional wedge shots. His seven birdies were accompanied by two bogeys.

Abhijit said, “I managed myself well despite the conditions not being easy as the wind was swirling around and the greens were tricky. I stayed patient and I’ve been rewarded for that. I was also very consistent with my putting.

“The wind generally doesn’t have much of an impact here in Jaipur. But this week we’ve had more windy conditions than usual for this venue.”

Om Prakash Chouhan capitalized on his hot short-game as he followed up his three chip-ins on the first two days with two more for birdies in round three. He also sank three birdies from a distance of 12 to 20 feet.

“My chipping and wedge shots have been outstanding this week. I’ve also made a lot of long putts over the last three days. I enjoy playing at Rambagh as I always feel I have a chance at this course. I’ve been in contention here every time but never won. I would like to change that.” Chouhan said