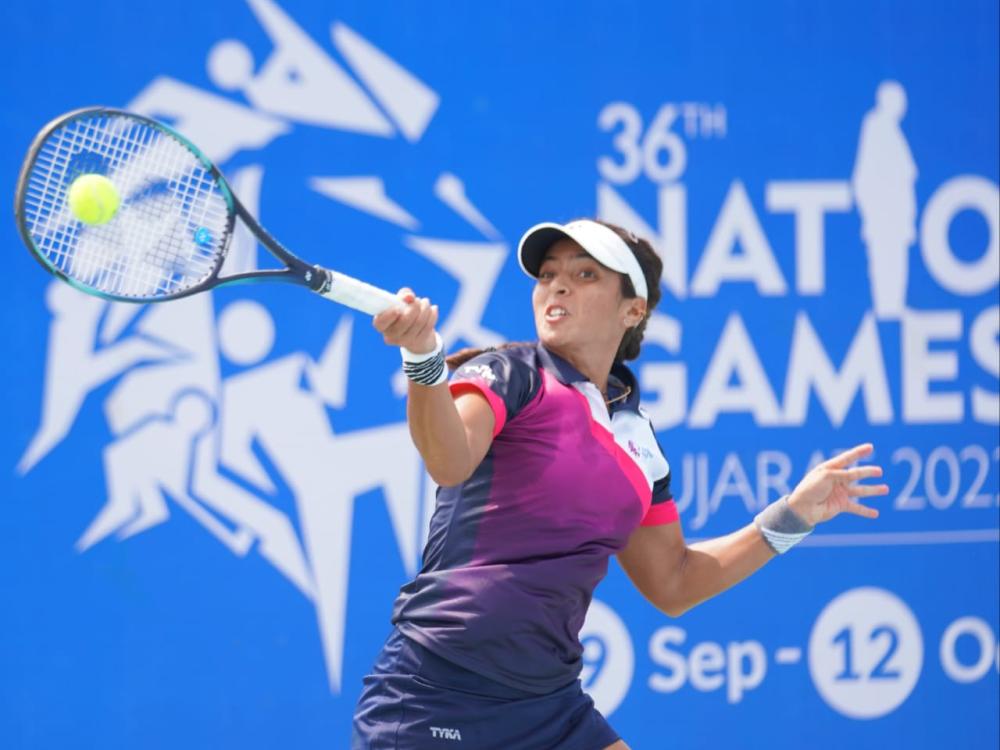 Hosts Gujarat opened the defence of their women’s team tennis title with a commanding win over Telangana while Bengal’s women’s Lawn Balls team chalked out a dominating 12-11 victory over Assam in the 36th National Games on Thursday.

Gujarat women dropped just four games in securing a 2-0 verdict against Telangana. They will now meet Karnataka for a place in the final. Karnataka ran out 2-0 winners against Uttar Pradesh.

In the other semifinal, Maharashtra will lock horns with Tamil Nadu, who wriggled out of a tight spot against Haryana. Maharashtra had defeated Delhi 2-0.

At the Kensville Golf and Country Club where Lawn Balls action is taking place, the Bengal team held their nerves to quell Assam’s fightback to register their second win in the Group and virtually assure themselves of a semifinal berth.

The Assam Fours team, led by Birmingham Commonwealth Games participant Tania Choudhary, and comprising Bangita Hazarika, Adinita Kakoty and Ananya Saikia, were trailing 1-5 after the first two ends, but clawed back to level 7-7.

Bengal, which fielded Renu Mohfa, Manisha Srivastava, Reema Pawa and Anchor Malhotra, held their nerves to regain a slender 11-10 lead in the penultimate 11th end and kept their noses ahead at the finish.

“As expected, it was a close match between teams who have experienced campaigners. It is a setback, especially because we made our way to the semifinals. But every loss teaches you something, and we will try to pick the positives and beat Gujarat on Friday. We hope to get back stronger against the home side,” Tania Choudhary said after the loss.

In other Lawn Bowls matches, hosts Gujarat dominated the proceedings against Manipur to register a 12-10 win while Lawn Bowls powerhouse Jharkhand made light work of Odisha to record a 33-3 win. In another contest, Delhi got the better of Bihar by a 20-9 margin.

At the shooting range, 2012 Olympic Games silver medallist Vijay Kumar (Himachal Pradesh) soaked in the pressure well to be lying second behind Ankur Goel (Uttarakhand) and ahead of the in-form Anish Bhanwala (Haryana) after the first stage of the men’s 25m Rapid Fire Pistol competition.

Similarly, in the women’s 10m Air Rifle qualification, Tilottama Sen (Karnataka) finished on top with 633.6 points. Sriyanka Sadangi (Odisha), Yukthi Rajendra (Karnataka) 629.3 and Nancy (Haryana) placed above Elavenil Valarivan (Gujarat) and Mehuli Ghosh (Bengal) but the final will come with its own set of challenges.

At the EKA TransStadia Arena, Delhi’s women’s team blanked Bengal 36-0 to book a Rugby 7s semifinal berth against Maharashtra while the West Bengal men’s team showed Services the exit with a 24-12 win in the quarterfinals.

In the men’s Netball semifinals in Bhavnagar, Gujarat stretched Telangana to the limit,  before losing by a wafer-thin margin53-55.

Kabaddi action will restart after a day’s break on Friday with Services facing Uttar Pradesh and Haryana taking on Maharashtra in the men’s semifinals on Friday.

The fight for places in the women’s final will pit Maharashtra against Tamil Nadu and Haryana against Himachal Pradesh.