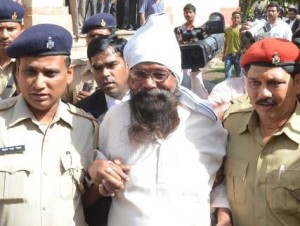 Congress MLA Sawana Lakra was convicted in a murder case.

Lakra was among three persons-two others being his body guard and driver-who were convicted by a local court.

The case dates back to April 27,2011.On this day,the bullet ridden body of a 21-year –old Avinaqsh Tiwari,who was allegedly in love with the niece of the Congress MLA was recovered.

Tiwari’s father had alleged that his son was abducted by the legislator with the help of his bodyguard and driver and killed.

The police filed the chargesheet alleging that the trio had abducted and murdered Tiwari.

The quantum of sentence will be pronounced May 15.

Lakra has been in jail for the last two years.