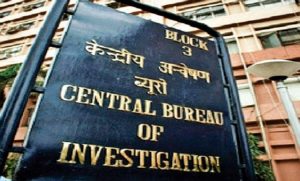 In its evidence-based investigation the Central Bureau of Investigation has booked a Joint Director General of Foreign Trade in New Delhi for allegedly receiving a bribe of Rs 1 crore from a businessman in 2018 in a fraud case of Rs 118 crore, reports PTI.

After the FIR was lodged against Joint Director General of Foreign Trade (DGFT) Sambhaji A Chavan and Deputy DGFT Prakash S Kamble, 2008 and 2013-batch Indian Trade Service officers respectively, and businessman Ramesh Manohar Chavan, among others, the CBI had conducted searches at nine locations in Delhi, Daman, Mumbai and Pune, PTI reports.

"It is alleged that eight Export Promotion Credit Guarantee (EPCG) licenses were issued in the name Radha Madhav Corporation Ltd (RMCL) by Directorate General for Foreign Trade for import of 'capital machinery' and as per the scheme, RMCL had the obligation to export eight times the value of duty saved on the goods imported," the PTI reports quoted  statement made in the FIR.