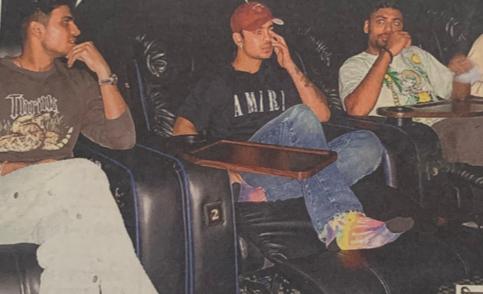 *Alongside, Team India Captain Shikhar Dhawan and Deputy Captain Shreshth Aiyyar had dinner with their friends in Bardawan Compound, Ranchi where JMM MLA Basant Soren and his family together with JSCA’s ex-Vice President Ajay Nath Shahdeo were present.

Two nights before the cricket players of India and South Africa Teams landed in Ranchi on Friday to play the 2nd ODI at Jharkhand State Cricket Association's International Stadium on Sunday.

This will be the first international cricket match scheduled to be played at this beautiful setup in absence of the late Amitabh Choudhary, founder and creator of modern JSCA and its world-class stadium, who left for his heavenly abode on August 16, 2022.

On Saturday, they were spotted jogging and practicing inside the stadium in a clean and green environment with a blue sky carrying floating clouds.

The stadium looked decked up. All players appeared enjoying the minimal humidity environment inside the green International stadium in Jharkhand’s capital city.

The players may not be aware that they were playing on an elevation of 620 metres above sea level. It makes the climate of Ranchi comfortable for human beings. Now, the Ranchi weather is quite dry with minimal humidity. The winter is slowly setting in.

Due to incessant rain during the past three days this week, the ground however was wet. The climate is: cloudy with temperatures varying between 24 -26*. The weather prediction is that there is a “70 percent” chance of rains on Sunday.

In any case, Team India players have adapted to the eco-system prevalent in Ranchi where the cricket fans were awaiting to watch the India- South Africa players present exciting performances in the T20 match on Sunday.