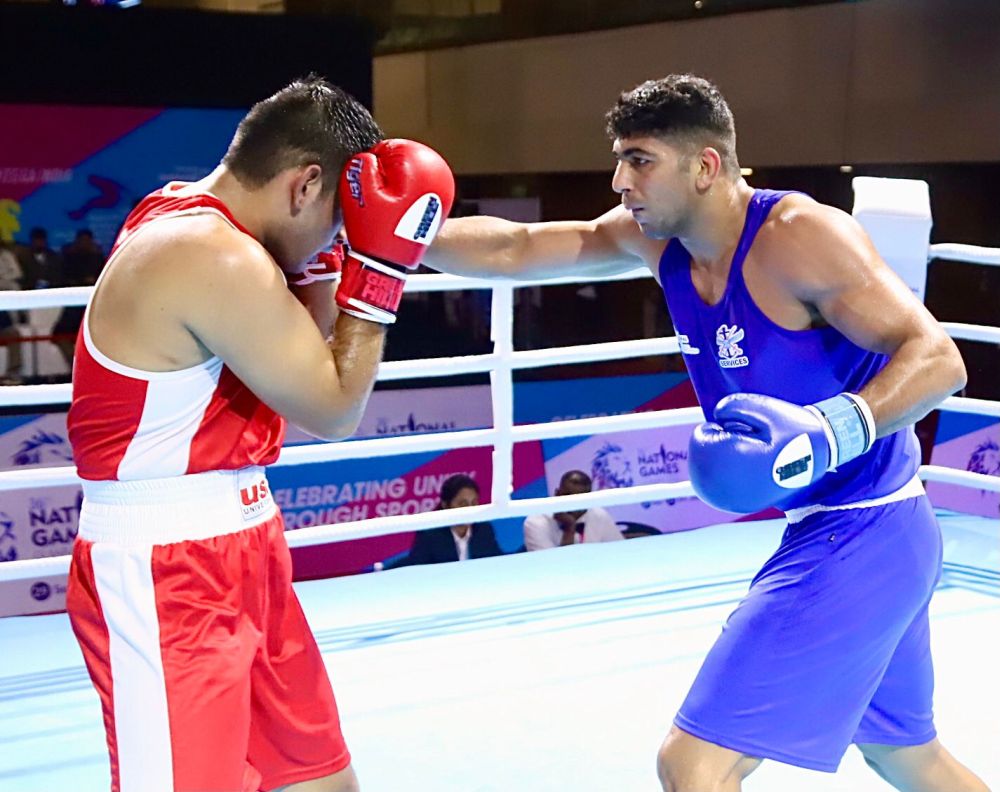 Representing the Services, Sumit,  opened up in style against Haryana’s Ankit Khatana, who failed to connect his punches. Sumit managed to breach through the defences of the South Asian Games gold medallist across the three rounds before eventually pocketing the men’s 75kg middleweight category bout by a unanimous verdict win at the Mahatma Mandir complex here.

Sumit will now be up against Maharashtra’s Nikhil Dubey for a place in the final. Nikhil outclassed Delhi boy Buntee Singh 5-0 in a lop-sided quarterfinal bout.

In the 92kg heavyweight category, Sanjeet used his long arms to great effect against the shorter Delhi opponent Harsh Kaushik, who braved two standing counts of eight in the second round. In the third round, Sanjeet got his headshots on target even as Harsh received another standing count to eventually lose the bout by RSC.

Assam girls Jamuna Boro and Ankushita Boro registered dominating victories to confirm their respective semifinal berths. Up against Rajasthan’s lesser-known Sapna Sharma in the opening bout of the day, Jamuna’s technical superiority gave her a clear edge in all three rounds in the 57kg featherweight category.

Battling a high fever for the past three days, Jamuna, however, did not show any signs of fatigue in the ring and got her combination punches to great effect to register a clear 5-0 win.

Jamuna will next face Haryana’s Poonam, who defeated Manipur’s Samim Band Khulakpham by split decision 4-1 in another 57kg quarterfinal.

Ankushita Boro breathed fire against Gujarat’s Paramjit Kaur, who was left searching for cover against the former World Youth champion from Assam.

Ankushita with an excellent array of shots to unsettle Kaur, who got as many as three standing counts before the referees decided to stop the contest in the second round in the 66kg category.

In the semifinal, Ankushita will take on Rajasthan’s Lalita, against whom she enjoys a dominating 3-0 advantage in head-to-head count.

Among the men, Haryana’s Naveen Kumar registered a commanding RSC win over UP’s Harish Yadav in the 92kg heavyweight category bout, while in the 75kg middleweight category, Mizoram’s Malsawmitluanga recorded a stunning 5-0 unanimous verdict win over Uttarakhand’s Pankaj Kumar. In the same category, Goa’s Puspender Rathee defeated UP’s Gagandeep 5-0, to set up a semifinal clash with the Mizo pugilist.