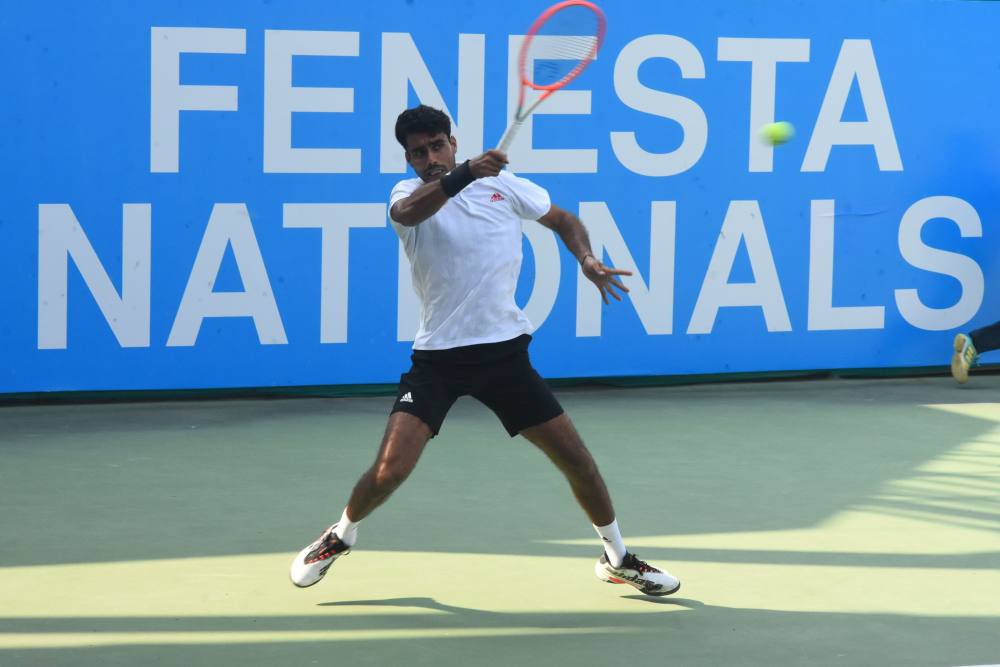 Former Davis cupper Vishnu Vardhan's winning spree came to an end as he was overwhelmed by younger rival  Digvijay Pratap Singh 4-6,4-6 in the semifinal of the   Fenesta Open tennis championship here on Saturday.

The 22-year-old Digvijay will take on  Manish Sureshkumar for the Championship title on Sunday. Manish outplayed  Chirag Duhan  6-1, 6-4 in the other semifinal.

In the women's semifinals, Vaidehi Chaudhari and Sai Samhitha Chamarthi had to battle it out to beat their rivals.

Digvijay has an ATP ranking of 681. Yet, to break into the final at the premier national tennis tournament was important for him. Competing against a 35-year-old rival with tons of experience was not easy. Digvijay showed good temperament and fine technique to seal the victory.

“My match against Vishnu Vardhan was good. I had lost easily against him a couple of months back. Today I showed my peak performance and am excited to get into the final. I am hoping for the best," said Digvijay.

Manish faced no resistance from  Chirag Duhan as he won with a measure of comfort at 6-1, 6-4. In the first set, Manish was flowing, as he played with freedom. The second set was bit more tight. Manish dug into experience and won the match.

“It was a really good match and he (Digvijay) is surely a tough opponent. I am glad that I won and really excited for the final. Hopefully, I can go all the way and win the tournament," said Manish.

Vaidehi had an up-and-down performance before quelling the challenge from Vaishnavi Adkar 2-6, 6-4, 6-0. There were few chances for Vaishnavi once Vaidehi settled down to a rhythm in the decider. The top seed showed control and won.

“Match was really close. I knew that she is a junior player and good. So I was ready for the match. In the first set, I was unable to give my best. After the second set, I started to give my best performance and it feels great to win the semi-finals," said Vaidehi.

In the second semi-final, Sai Samhitha Chamarthi outgunned Akanksha Nitture 7-5, 6-3. This was a tough match for Sai but she pulled it off well in straight sets.

“I was down 4-5 and 15-40 in the first set. I converted the set and took 7-5. She (Akansha) played really well in the first set. I played with more confidence in the second set and closed it at 6-3. Hopefully, I will do better tomorrow in the final. The Fenesta Open has been treating me really well and it is my favourite tournament," said Sai Samhitha.

The boy’s under-18 final will be between Aman Dahiya and Denim Yadav.

" I won my match against a close friend of mine. I played really well and aggressively today. I took my chances and had to go more inside the baseline volley," said Aman.

“It was really tough. I won the first set 7-5 when I broke him in the end. I started the second set a bit slower and in the third set I put in my best efforts and hoping for the best tomorrow," said Denim.

The girls' under-18 final will be between Suhitha Maruri and Madhurima Sawant. Suhitha showed clean hitting on either flank as she whacked Lakshmi Prabha 6-2, 6-0. In the second semi-final, Madhurima won 1-6, 6-2, 6-4 against Ruma Gaikaiwari. “I am really happy to be in the final," said Suhitha.

Said Madhuri: " I played my friend Ruma Gaikaiwari and it was a tough match. After the first set, I asked myself not to focus on result and just enjoy the match. Then I started playing freely and took the second set 6-2 and the third set 6-4. This is my first Fenesta final, I hope to win it."

On winning the Boy’s Doubles at the Fenesta Open  Rethin Pranav & Mahalingam Khandhavel added, “It was a great tournament and we are really happy at the win after the tie-breaker.”