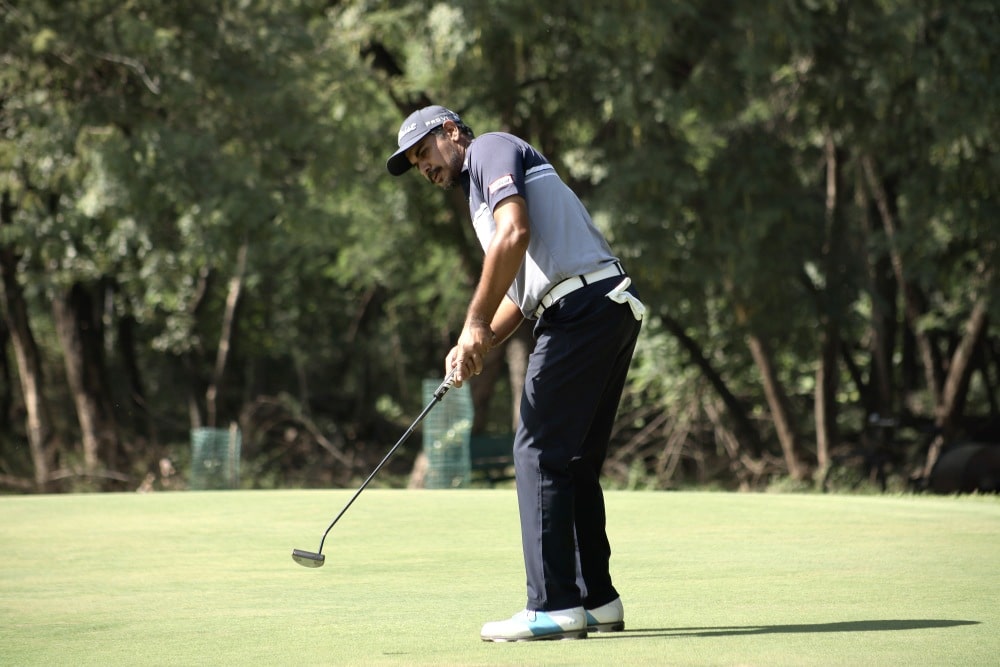 Gaganjeet Bhullar shot four-under 68 to lead by one shot at 14-under 202 and emerge as the top contender after the penultimate round of the INR 1.5 Crore Jeev Milkha Singh Invitational at the Chandigarh Golf Club.

Bengaluru’s Chikkarangappa S  carded 67 and local favourite Karandeep Kochhar returned an error-free 68  and both were hot on the leader’s heels in tied second place at a total of 13-under 203 with an exciting finish lying in prospect on Sunday.

Second-round leader Abhijit Singh Chadha, slipped to fourth place at 11-under 205 after shooting a 72 on Saturday.

Gaganjeet Bhullar (69-65-68), a winner of 11 international titles, gained one spot from his overnight second position as a result of his steady effort that featured five birdies and a bogey. Bhullar sank early birdies on the first and third from a range of eight to 12 feet. After his bogey on the fourth, Gaganjeet created a few opportunities on the front-nine but could only manage a birdie on the sixth as he missed a few short putts.

On the back nine, Bhullar made a couple of good par saves and birdies on the two par-5s, 13th and 16th, including a great up and down on the latter, to end the day as sole leader.

“I struck it well and hit a lot of regulations today but didn’t hole as many putts as the last round. It was a steady round as I just conceded one bogey. My past experiences have taught me that whenever you are in contention over the weekend, minimizing unforced errors gives you an opportunity to climb up the leaderboard. That was the goal today.  "said Bhullar

Chikkarangappa’s (65-71-67) round featured seven birdies and two bogeys and lifted him two spots from his overnight fourth position. He managed to pull himself out of trouble on a few occasions. Chikka, the 2018 champion, extracted birdies in situations where he found the bunker, trees and the rough.

“It was a great start for me with three birdies on the first five holes. My scrambling was good today, I made some amazing up and downs from the bunker and that sort of kept me going and helped build the momentum that finally resulted in a few solid pars. The body is feeling good, I feel well-rested and am ready to put up my best effort in the final round.” opined Chikka

Karandeep Kochhar (65-70-68), the 2020 champion, brought in a card of 68 to move up one spot from his overnight third place. , “I was quite consistent with my hitting today, making 16 greens in regulation. I was also pleased to be error-free. This gives me a good chance in the last round.”

Among the seven players bunched in tied fifth at a total of eight-under 208, were Chandigarh-based golfers Akshay Sharma and Amrit Lal as well as prominent names Rahil Gangjee, Rashid Khan and Khalin Joshi.

Jyoti Randhawa was tied 13th at six-under 210 while Ajeetesh Sandhu and Udayan Mane were both tied 28th at four-under 212.

The two amateurs  Brijesh Kumar and Bengaluru’s Aryan Roopa Anand, were both tied 52nd at three-over 219.