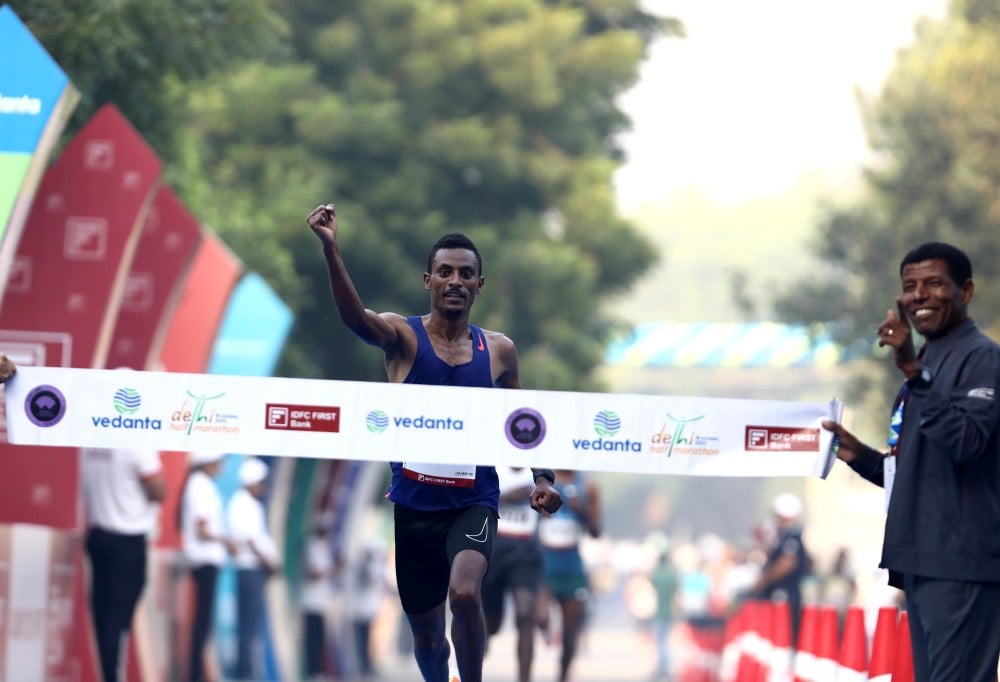 Ethiopia’s Chala Regasa and Kenya’s Irine Cheptai shared honours as they won maiden Vedanta Delhi Half Marathon titles when they crossing the line in 60:30 and 66.42 respectively here on Sunday.

However no Indian figured among the first 12 runners as the Africans as expected dominated men and women section.  Six Ethiopian and four Kenyans figure among top ten in the men section while in the women section was.Seven Ethiopans,two from Kenya and one from Uganda feature among first ten.

Though in the  Indian Elite men's category defending champion Avinash Sable retained the title but he failed to improve upon his on previous timing of 1 hr30s. It turned out to be a  photo finish Sable and Kartik Kumar The duo clocked an identical 64 minutes.   However the top-billed Sable who was declared the winner by the technical officials of the Athletics Federation of India after investigating the footage.

There were no surprises in the Indian women’s elite where Sanjivani Jadhav bagged the crown in the world’s premier half marathon after two previous podium finishes.

Regasa, 25, came out on top of a thrilling three-man battle over the final kilometre in the capital, sprinting away from Kenya’s Felix Kipkoech and fellow Ethiopian Boki Diriba with 400 metres to go to take the US $27,000 first prize cheque.

Kipkeoch finished second in 60:33 while the debutant Diriba, the Ethiopian U20 5000m champion on the track and still just 18, was third in 60:34. The leading trio passed 20km in 57:31 and duelled almost all the way to the finish line at the famous Jawaharlal Nehru Stadium.

“The final two kilometres were tough, but I knew I had the speed to come out in front as I have a good background at shorter distances on the track,” said Regasa, who was formerly a top-class middle-distance runner.

By contrast, the International women’s race was a one-woman show from just after halfway. Cheptai made a decisive move just after 12 kilometres and was never challenged before reducing her personal best by one second to 66:42.

Cheptai, who was in fourth place the last time, finished more than a minute in front of Ethiopia’s 2022 World Athletics Championships 5000m bronze medallist Dawit Seyaum, who was second in 68:02. Stella Chesang set a Ugandan record of 68:11 in third place. Returning to the venue where he became the first Indian to complete the half marathon in under 61 minutes in 2020, Sable said his plan was a little different this year.

“It was overall a good race. We got off to a good start and stayed with the Elite group for the first 7-8 kilometres. Their pace wasn’t that fast and my plan was to stay together with Karthik, who maintained his pace with me through the race,” the 2022 Commonwealth Games 3,000m steeplechase silver medallist said.

“Since my practice also wasn’t specific to the half marathon this year, my focus was more on placing than timing. In 2020, I trained well for the half marathon and back then I wanted to go for the record,” added Sable. Elated to have bagged second place, Kartik was modest in admitting, “I had no plan, I just had to run and keep up with Avinash.”

Sanjivani was well ahead of the Indian pack right from the start and was hardly challenged by Monika Athare and Priti Lamba who finished second and third respectively. Sanjivani clocked 01:17:53 while Monika timed 01:18:39 and Priti finished at 01:19:06. “Soon after the first 2-3 kms, I went ahead and had to pace my own race. If I had a pacer I could have gone faster but I am still happy to finish first,” Sanjivani said.