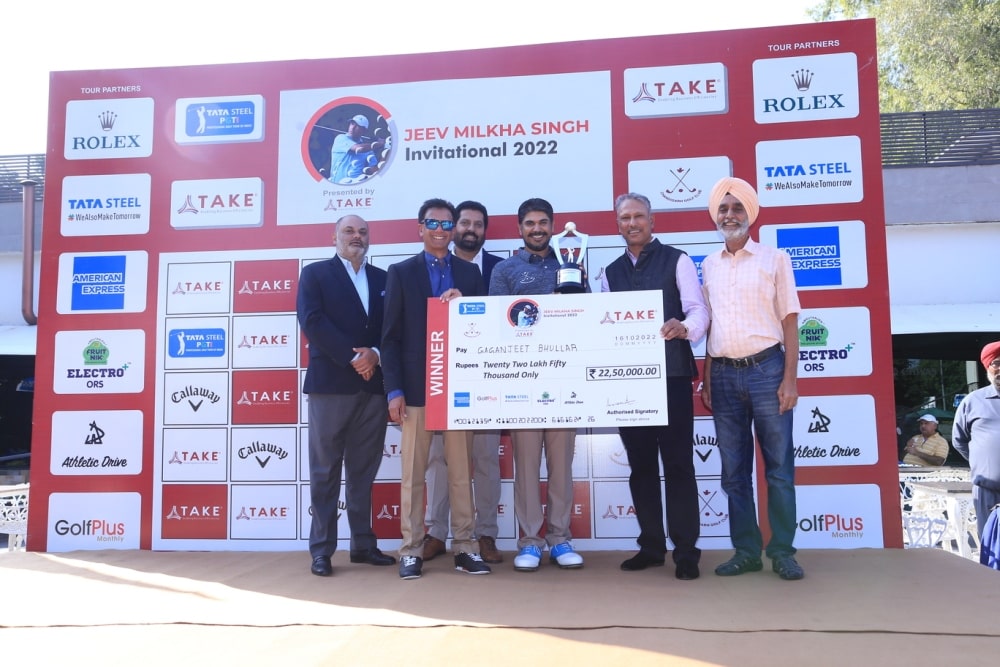 Gaganjeet Bhullar held his nerves at the crucial moments as he converted his final shot on the 18th – a 12-footer birdie putt to win his maiden Rs 1.5 cr Jeev Milkha Singh Invitational here on Sunday.

Gaganjeet, who carded one-under 71 in his final round, was tied at the top with local challenger Karandeep Kocchar till the 18th hole, edged past on his final putt to sink a sensational birdie to walk away with the winner’s cheque with an overall score of 15-under 273.

Om Prakash Chouhan who shot the day’s best round of six-under 66 finished at tied fifth with Bangladeshi Jamal Hossain and Delhi’s Shamim Khan with identical totals of 12-under 276.

Among the other prominent names, Olympian Udayan Mane finished T13 at 9-under 279, veteran golfer Jyoti Randhawa finished T20 at 6-under 282 and former winner Ajeetesh Sandhu of Chandigarh finished T28 at 4-under 284 and continues to lead the TATA Steel PGTI Order of Merit.

Gaganjeet had a bumpy start today bogeying twice on the front nine as birdies eluded him. However, his back nine got him some breathing space with back-to-back birdies on the 11th and 12th holes before hitting a roadblock with another bogey on the 15th hole where he missed a short putt.

“I played my back nine like a champion today. I did have a shaky start, but my past experience as a golfer and my knowledge of this course together came in handy today. I kept telling myself to not go for the result but play one shot at a time and I think that worked things my way. The birdie on the 11th, my first today was probably the turning point in my round. My second birdie on the 16th got me motivated for the final two holes. My experience of the course helped me visualize my shots on the final hole in advance and that’s why sinking in the 12-footer in the final shot was not difficult,” said an elated Gaganjeet Bhullar after his win.

The 2020 winner Karandeep Kochhar who missed his birdie-putt on the 18th, finished as the runner-up for the second time, his first being in 2018. Karandeep who too shot a 71 today made three birdies on the 2nd, 16th and 17th and two bogeys on the 3rd and 10th holes.

Kochhar moved up six spots to be placed fourth on the TATA Steel PGTI Order of Merit.