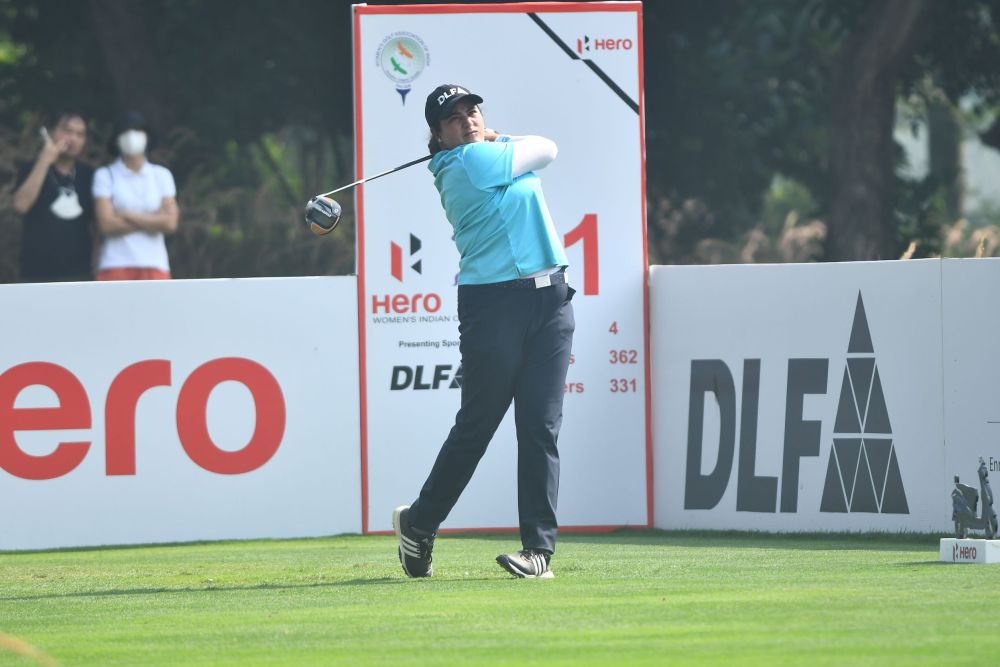 It turned out to be India day as  Amandeep Drall carded a stunning bogey-free  67  to take the sole lead on the third day of the US$ 400,000 Hero Women’s Indian Open here on Saturday.  Then  Aditi Ashok thrilled the crowd with an eagle two on the Par-4 ninth during her round of 69 lying fourth and Gaurika Bishnoi (72) despite a bogey on the 18th was fifth, making it three Indians in the Top five.

Amandeep fired a confident six-footer for a final birdie and that gave her a one-shot advantage over Sweden’s Caroline Hedwall (68) and German Olivia Cowan, whose bogey-free 65 equalled the week’s best card.

Of the top five, only Hedwall (2011) and Ashok (2016) have previously won the Hero Women’s Indian Open, while Drall, Cowan and Bishnoi are yet to register a win on the Ladies European Tour.

Amandeep, who logged her first LET Top-10 only recently in the Swiss Ladies Open, and Hedwall, who has finished in Top-2 three times in four starts at the HWIO, played superbly on the front nine.

Hedwall played the front nine in 4-under 32 and moved to 9-under.  The Indian stayed patient despite some birdie putts not dropping on the first five holes. Then the putts did fall three times between the sixth and the ninth to turn in 3-under. At that stage, Hedwall led the field at 9-under and  Amandeep was one behind.

Then came the dramatic 10th, where Hedwall missed and made a bogey and  Amandeep holed a neat birdie for a two-shot swing and the places had been swapped at the top of the leaderboard with the Indian at 9-under and the at Swede 8-under.

Speaking of the tournament so far, the third-round leader said, “I had a good start on the first day with a bogey-free 67. Then it was a steady round on the second. So, I was all geared up for today. The front nine was very scoring because they moved a couple of tees in front and a couple of pins were accessible so you could have made birdies and that’s what I did today. I had quite a few pars to begin with. I hit them decently close but the putts didn’t drop, but then they (fall) did in the last couple of holes on the front nine.”

“On this golf course, you have to stay patient. The greens are rolling quickly so you got to keep giving yourself chances till the very end and hope you can make the putts whether from close or from a little further out.  Today there were a couple of mid-range putts which I holed starting on the sixth and seventh they were like about 18, 19-footers. That gave me a nice momentum.”

Like  Amandeep l, the  33-year-old Swede, Hedwall, did not drop a shot on the front nine. Then came back-to-back bogeys on the 10th and 11th. Thereafter she was playing ‘catch-up’ and finally, she ended day one behind.

Aditi Ashok, who has been missing out on a lot of putts, did roll a few but also dropped three bogeys on the front nine. “I have not had the putts going for me, but I did get an eagle, when I drove the green and holed a 50-footer, probably my longest putt this season.”

Gaurika Bishnoi stayed patient and battled the whole day with two birdies and two bogeys over the first 16 holes, before a birdie on the 17th gave her a chance to move up before she dropped a shot on the 18th to be fifth.

While Amandeep and Hedwall were engaged in a tight battle, German’s Olivia Cowan, tied ninth on her last visit to India, was charging up the leaderboard. After four quiet pars to start, she caught fire. Cowan birdied six of the next seven, including five in a row from the seventh. There was one more on the 14th for the day’s work of 7-under which was without a blemish. She may still have felt disappointed at missing a birdie on the 18th, where many others picked a shot.

Speaking after her bogey-free round, the 26-year-old Cowan said, '“I’ve played well both days of the week really, and so I felt quite comfortable with my game. It is a difficult course, so you never really know what's going to happen. I mean, a big number can be around the corner at any point, so you just kind of have to stick to what you've been doing and be patient out there.'