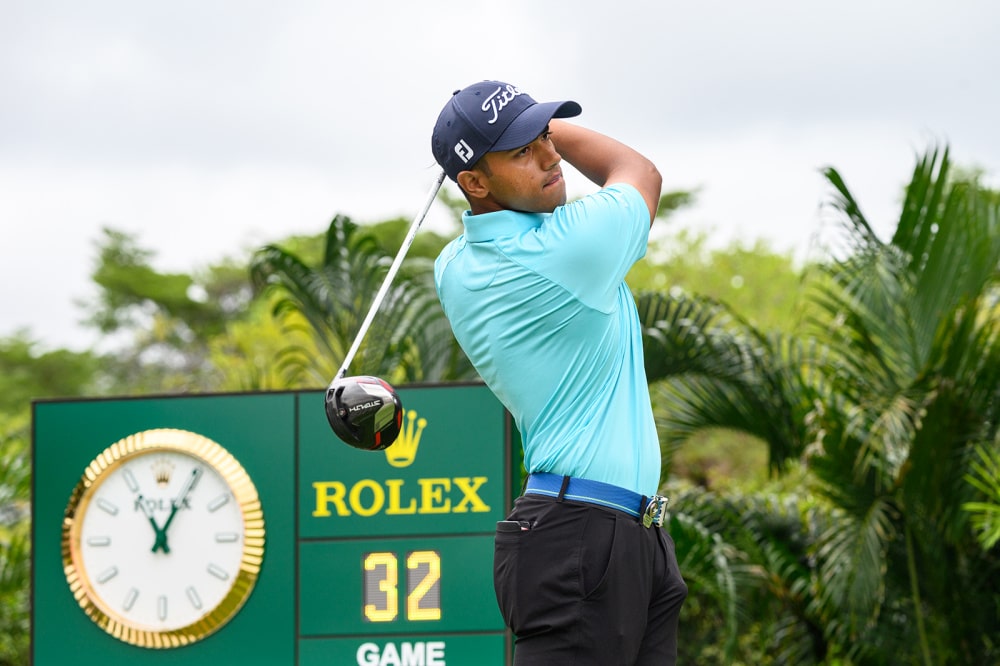 *Shaurya Bhattacharya at the AAC in Chonburi, Thailand

Three of the seven Indians -Krishnav Nikhil Chopraa, Shaurya Bhattacharya, and Aryan Roopa Anand -in the fray made the cut while others fell by the wayside at the 13th Asian Pacific Amateur Championship here on Friday.

Shaurya shot 4-under 68, while Aryan carded 3-under 69 despite a double bogey at the finish and Krishnav just could not get the putts to fall in his 1-over 73.

China’s Bo Jin (65-69), whose brother Cheng won in 2015, stayed on course to adding to the family silverware. He led by one at the midway stage and was chased hard by the teen Thai star, Ratchanon Chantananuwat (67-68).

Aryan, hoping to get into the Nomura Cup team following the pullout of Rayhan Thomas, who is unable to get time off from college in the US, said, “I played great for 17 holes, but a lapse led to a double on the last hole. Still, I was happy to pull back with a 69. I hope I can make more ground over the weekend.”

Shaurya, whose coach, Rahul Bajaj, a team silver medallist from the 2010 Asian Games, was his caddie, said, “I am proud of the fightback after the first day 76. Especially, the three birdies from 15th to 17th and the way I hung in for the first 13 holes with two birdies and no bogeys. It was great to have my coach, Rahul Sir, on the bag. It helped.”

Krishnav had a good start from the tenth with birdies on 15 and 16. After that many putts did not fall and had just one more birdie on but dropped four bogeys for 73.

Bo Jin closed with a bogey on the ninth, while Chantananuwat, who is called ‘TK’, birdied the sixth and eagled the eighth from 66 feet plus for a stunning finish.

A year ago, Bo had a similar 36-hole lead but finished tied third. He said, “I am in a great position and am obviously reminded of Dubai. I have played some great golf so far, and I hope to do the same over the weekend and finish the job.”

Two countries, Kyrgyzstan and Nepal had their golfers make the cut for the first time at the AAC. Jantai Malatev (73-69), whose country Kyrgyzstan has just one 9-hole golf course, was tied for 33rd while Subhash Tamang (74-70) became the first player from Nepal to make the cut.