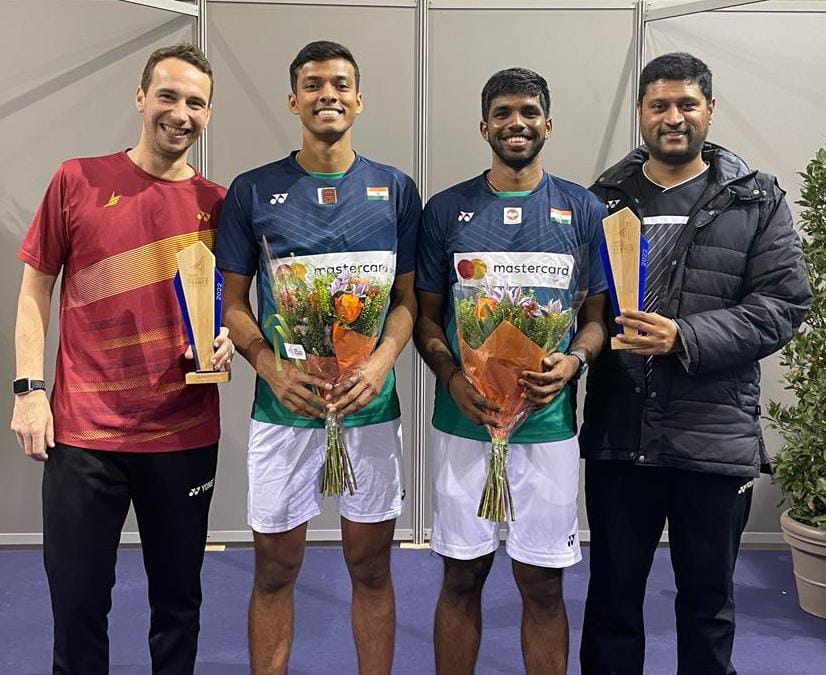 The Badminton Association of India (BAI) on Monday, announced a cash reward of INR 5 lakh each for both Sankar Muthusamy and the men’s doubles pair of Satwik Reddy and Chirag Shetty for their commendable performances at the BWF World Junior Championships and French Open 750 World Tour event respectively.

"This is a great moment of pride for all of us to see both our junior as well as senior shuttlers ensuring podium finishes defeating top-class players and becoming the flag bearers of pride and glory,” said BAI president  Himanta Biswa Sarma while announcing the prize money.

The doubles duo of Satwik and Chirag continued their fine form to defeat Chinese Taipei’s Lu Ching Yao & Yang Po Han to clinch the French Open title and become the first Indian doubles pair to win a BWF Super 750 tournament. They had also defeated the World Number 1 pair of Takuro Hoki and Yugo Kobayashi in the quarter-final.

The pair will get five lakh for winning the historic gold in Paris. While former Junior World number 1 Sankar Muthusamy impressed everyone with his gutsy play throughout the World Junior Championships before going down in the summit clash against Chinese Taipei’s Kuo kuan Lin.

He became the ninth Indian shuttler to bag a medal at the premier junior championships, and was awarded five lakh for the silver medal he will be bring home. He also became the fourth Indian to win a silver medal in this prestigious competition.

“The boys in the past one week have played some fearless badminton and we are really glad to see India finishing among the top countries at such global events. This will also be a huge inspiration for the younger generations,” said BAI Secretary Sanjay Mishra.

The doubles duo of Chirag Shetty and Satwik have also had a dream year as they started the 2022 with a gold medal at the India Open followed by the historic Thomas Cup and Commonwealth Games victory and winning a bronze medal at the World Championships.

BAI had earlier given a  INR 1 crore for the Thomas Cup winning squad and had announced cash award of close to 1.5 crore for the 2022 Commonwealth Games medallists, as well as 2021 and 2022 World Championships medallists.