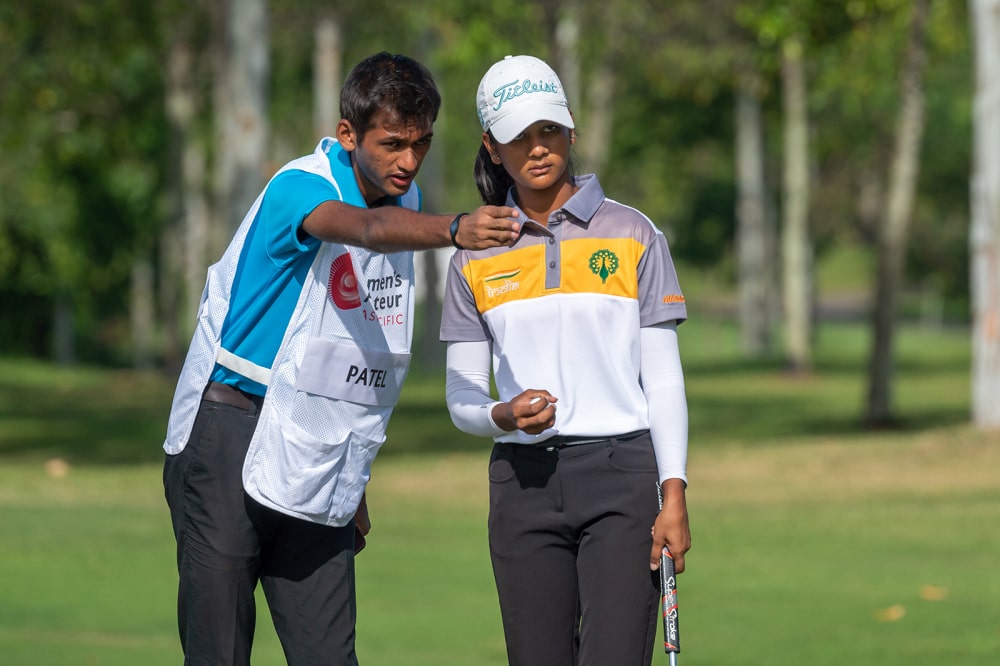 *Nishna Patel with her brother, who was her caddie in the first round at the Women's Amateur Asia-Pacific Championship - Pic WAAP

It turned out to be an uneven day for the Indians at Women’s Amateur Asia Pacific as Mumbai teenager Nishna Patel carded par 72 to be at tied 30th.

Kriti Chowhan (73) was at tied 43rd and the National champion, Avani Prashanth (74) was placed joint 52nd after the first round of the Women’s Amateur Asia-Pacific championship. at the Waterside Course at the Siam Country Club here on Thursday

Three other Indians, in the fray Mannat Brar returned three over par 75 and was tied 61st, Sifat Sagoo had poor round of five over 77 and was at 71st and Ceerat Kang with dismal at 7-over 79 was lying at lowly 78th place.

Nishna, who represented India at the Women’s Amateur in Scotland and the World Amateur Team Championship in France, trains at the Bombay Presidency Golf Club. She also missed the cut at the WAAP last year in Abu Dhabi. She started with two bogeys in the first two holes, but fought back with two birdies to get to even par.

Avani had some great saves, but she also dropped shots when she went into the bunker and failed with up-and-down for pars. She also had three-putted the ninth, which was her last hole. Avani had four bogeys and two birdies.

Kriti Chowhan, who was tied 34th in the 2021 edition of WAAP, shot 1-over 73 with two birdies against three bogeys.

Malaysia’s Liyana Durisic, 21, had seven birdies, five of them in last six holes in a round of 6-under 66 for a one-shot lead over Australia’s Kelsey Bennett and local Natthakritta Vongtaveelap, who shot 5-under 67 each.

Bennett and Vongtaveelap were among the three players, who tied for second in 2021 behind the winner  Mizuki Hashimoto, who was tied fifth at 69 after the first round on Thursday.