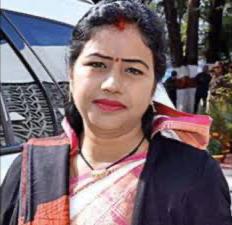 She was arrested on Thursday afternoon, soon after she was convicted in a 2016 case by the special MP-MLA court for Hazaribag-Ramgarh and Chatra.

She was the main accused in the 2016 firing incident at Gola in Ramgarh district of Jharkhand. Her case (79/2016) was registered in Ramgarh police station.

In all, there were a total of 45 testimonies in this case. At that time in Hazaribagh, the then BDO’s informant Advocate, Atmaram Choudhary informed that the case was going on under Sections 147,248,149,307,326 and 333.

During the order on Tuesday, a total of 13 people, including Congress MLA Mamata Devi, who were taken into custody on last Thursday, were sent to Loknayak Jayprakash Narayan Central jail in Hazaribagh.

Their criminal act dates back to August 20,2016. On this date nearly 200 villagers under the banner of Nagrik Chetna Manch led by Mamata Devi were sitting on a dharna in front of company in Gola police station area of Ramgarh to shut down IPL company.

During this some villagers became furious. Vandalism started in government vehicles. There was a fierce clash between the police and the villagers. Police had to fire for self defence. Four people had died and about three dozen people were injured in the incident.The CO, BDO and SHO and other policemen posted there to maintain law and order were injured in the incident.

Four separate FIRs were lodged in the Rajrappa and Gola police station.