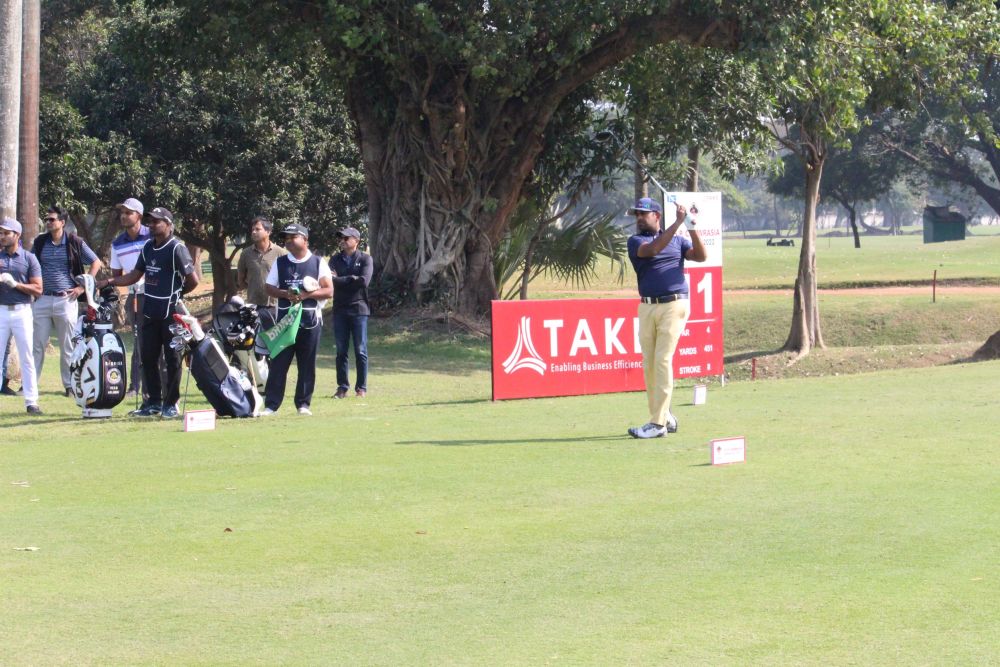 Pre-tournament favourite Anirban Lahiri, carded a sedate one under 71 to move up a share lead with Manu Gandas at the end of the penultimate round of the inaugural Rs one crore SSP Chawrasia Invitational at the Royal Calcutta Golf Club (RCGC) here on Friday.

Manu returned even-par 72 which was good enough for him to stay in the joint lead on a windy day.  The joint leaders are at nine under 207 after the third round

Gaganjeet Bhullar,  struck the day’s joint-best score of 67 which featured birdies on the last four holes and helped him close the penultimate round in tied third place along with Gurugram golfer Veer Ahlawat (70) at eight-under 208.   Delhi’s Kapil Kumar also fired a 67 to end the day in fifth place at seven-under 209.

Tournament host SSP Chawrasia shot a 73 while Shankar Das matched the day’s best 67 as the duo was tied at 13th at two-under 214 to be the highest-placed among the Kolkata-based professionals.

Seven-time international winner Lahiri (71-65-71), who was overnight second and one stroke off the lead, had an up-and-down day making two birdies and three bogeys over the first 15 holes.  He dropped shots as a result of a couple of poor approach shots but pulled it back with two birdies on the 16th and 17th where he landed his second shots within one foot.

Lahiri said, “It was a tough day overall. As the wind was up it was a good test and challenge. I was a little disappointed with how I played. There were too many errors and I played the par-5s poorly. So, I was not my usual self on the golf course today. Having said that, it was nice to get a couple of birdies at the end and still stay in the hunt.

“I’m hoping that the conditions are similar in round four because then it will be a battle out there with everyone battling the conditions. I felt quite comfortable in the gusty conditions today and that comes from my experience of playing in the US and Europe. I prefer a stern test to easy conditions. I think tomorrow it's going to be about execution and about hitting a lot of percentage shots as well as controlling your ball if it gets windy. If it doesn’t get windy then you better, make a lot of birdies because everyone is playing really well.”

Gurugram-based Gandas (69-66-72), the overnight leader by one shot, had a mixed round. He was two-over at the turn having dropped a bogey and a double-bogey on the seventh and eighth after finding the bunker on both occasions.

He then recovered ground with birdies on the 10th, 12th and 15th where he rolled in a couple of crucial putts. He however missed a short putt on the 17th for another bogey.

Gandas looking for a record sixth title this season, said, “I had some bad tee shots today and a couple of bad judgements and mistakes on my approach shots coming in. I also missed a couple of short putts. Good judgement is necessary in such conditions. That’s where I made errors today. But fortunately, my game picked up on the back-nine. I'm going to stick to what I did on the first two days and let's see how it goes.”

Gaganjeet Bhullar also threw his hat in the ring by firing it close to the hole on the last four holes to pick up birdies from the 15th to the 18th during his round of 67.