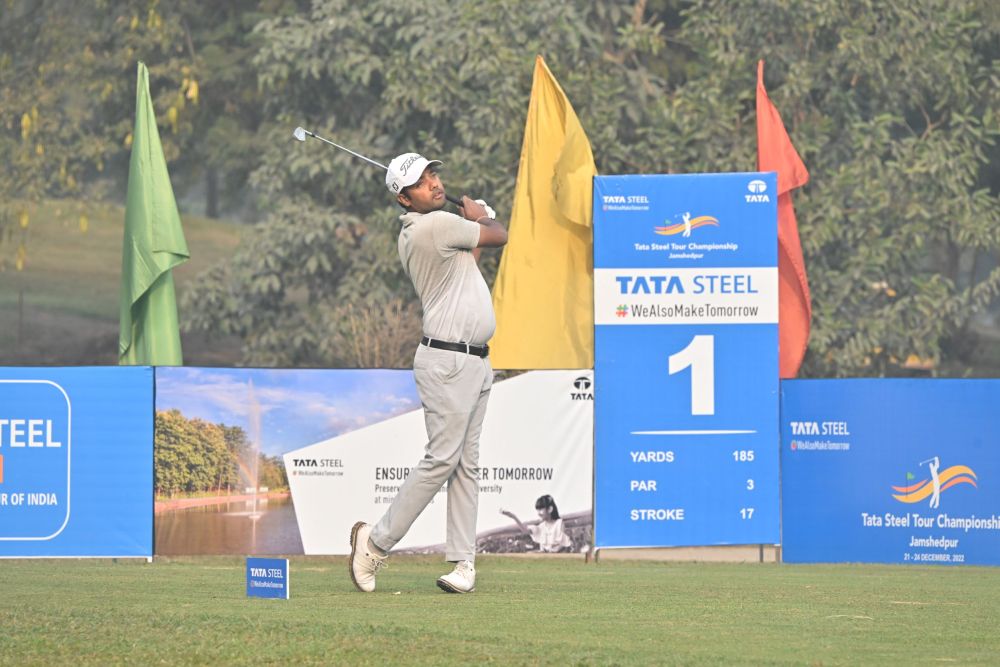 Delhi’s Kapil Kumar fired a brilliant nine-under 63 to lead round one of the Rs. 3 crore TATA Steel Tour Championship at the Beldih and Golmuri Golf Courses in Jamshedpur.

Shiv Kapur, a winner of six international titles,  returned a 64 to be placed second in this season-ending event. His round featured an albatross on the par-5 ninth hole where he holed his second shot from 240 yards.

TATA Steel PGTI Rankings leader Manu Gandas shot a 66 to be tied for fourth along with Udayan Mane and Chikkarangappa.

The first round saw one half of the field play their first nine holes at Golmuri and second nine at Beldih Golf Course while the other half of the field played Beldih first followed by Golmuri. This format will also be followed for the next three rounds of the tournament in Jamshedpur with the par for the round being 72.

Kapil Kumar, currently 21st in the TATA Steel PGTI Rankings with three top-10s to his credit in the season, fired it close to the hole at Golmuri to pick up three of his four birdies on the front-nine from a range of six feet. He then sank longer putts on the newly-relaid Beldih to pick up three more birdies. He also made a six-feet eagle conversion on the 12th.

“I got into a good zone after my second birdie of the day on the fourth hole. I was feeling good about my putting at that stage. On the eighth tee, I set myself a target to make birdies on the eighth and ninth so that I can close the front-nine at four-under and then add another four to five birdies on the back-nine to end up with something around eight or nine-under." Kapil said

Shiv Kapur, who has been recovering from a rib injury and thus played his first competitive round in over two months, was off to a brisk start with two birdies and an albatross on the ninth at Golmuri.  He then added three more birdies at Beldih by sinking a 15-footer on the 11th and landing his approach within inches of the flag on the 15th.

“I surprised myself today with my first competitive round in quite some time and my only goal is to get through the four rounds without much pain. I had a steady start. Then on the ninth hole I had a great yardage, I had 240 yards to the flag. The 5-wood took off on a great line and I did not realize till I was halfway up to the green that I had holed it. It was a perfect shot that set up the rest of the day for me." said Shiv.