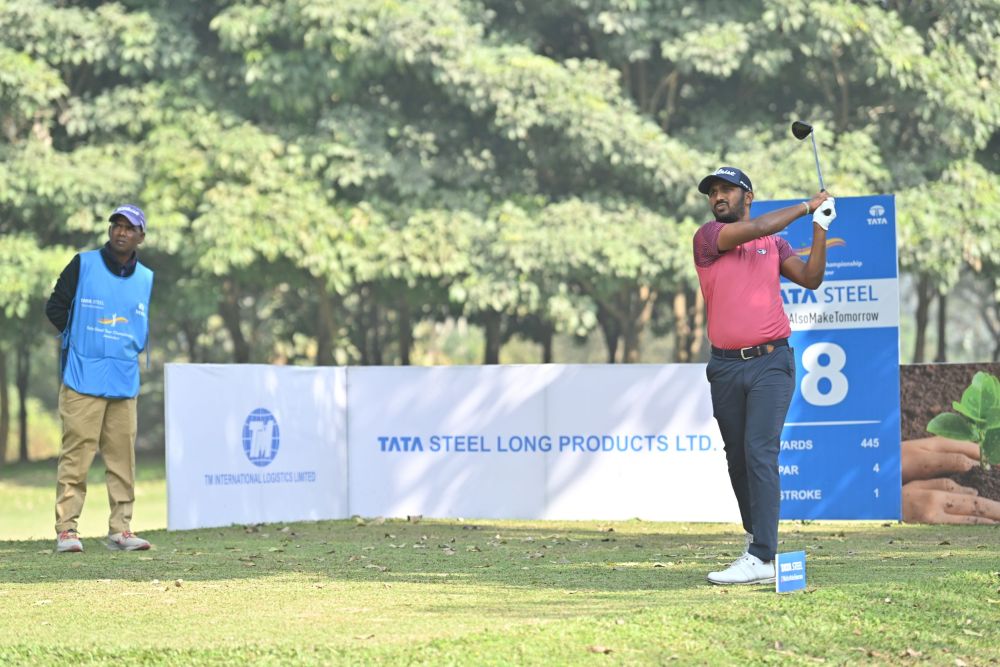 Chikkarangappa S of Bengaluru fired a sublime 10-under 62, to lead the third and penultimate round of the Rs. 3-crore TATA Steel Tour Championship being played at the Beldih and Golmuri Golf Courses in Jamshedpur.

Chikka’s total moved to 17-under 199 giving him a one-shot advantage. Fourteen-time PGTI winner Chikka (66-71-62), who has been a runner-up on two previous occasions in Jamshedpur, zoomed 12 spots from his overnight tied 13th following his extraordinary third-round effort that featured two early eagles.

Manu Gandas of Gurugram was in a good position to stake his claim for the PGTI Order of Merit title as his round of 68 saw him continue in tied fourth place at 14-under 202, comfortably ahead of his nearest rivals for the title – Chandigarh’s Ajeetesh Sandhu (tied 14th at 10-under 206), Om Prakash Chouhan of Mhow (tied 17th at nine-under 207) and Chandigarh’s Yuvraj Sandhu (tied 42nd at one-under 215).

Chikkarangappa , who returned the week’s lowest score so far, was off to an unbelievable start on day three as he made eagles on the second and fourth holes with 15-feet conversions on both occasions. He also narrowly missed an eagle from 20 feet on the third where he settled for a birdie. The bogey on the fifth didn’t upset Chikka’s momentum as he continued to fire in his irons and wedges within close range picking up birdies on the sixth, seventh and ninth. He then made further in-roads on the back-nine claiming four birdies including two from 12 feet in exchange for a bogey.

“It was a dream round. Even though I've been playing well of late. Sinking two eagles early on gave me good momentum to carry forward. Comparing the two courses I would say, Golmuri is on the shorter side where a lot of people go for birdies and eagles. "said Chikka

Kapil Kumar bogeyed his first two holes after missing short putts. But his ball-striking got him back in the game as he traded eight birdies for a lone bogey thereafter.

Khalin Joshi’s eagle on the second where he landed his approach from 240 yards within inches of the pin set up his round. He then added six more birdies at the expense of one bogey.