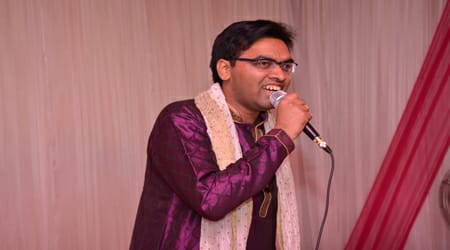 They say that fate and hard work can take a man from rags to riches. Your present conditions cannot determine your future if you’re investing labour and solidity into it. The same is the story of Rohit Akouri who was born in Patna of Bihar and brought up in Ranchi of Jharkhand but now is in buzz for being seen as a Azab Singh Ki Gajab Kahani as a playback singer in Bollywood.

Rohit Akhouri was born in South SK Puri, Boring Road, Patna. It happens to be prone to floods. Because of the flood, his house got flooded and Akhouri's family suffered and helped other affected neighbours to recover from the damage caused to their properties. They shifted to Ranchi where he was educated and grew up to rise as a singer.

Since childhood, Rohit had a keen interest in singing and music. He was merely 14 years old when he was promoted by his music lover parents-father Akhouri Uday Pratap Sinha and mother Maya Sinha. Later, he says he and his parents were inspired by legendary singer Mohammed Rafi and lyricist Faaiz Anwar, who gave him the break after he landed in Mumbai in 2008. As a result, his first music album Kai Khwahisein was released by World Wide Record in 2010.

Rohit Akhouri comes from a very humble background. So, when he was called to Mumbai he was travelling via train. Before leaving for Mumbai, singer Rohit Akhouri had participated in a number of singing competitions at the state level in Jharkhand. However, he gained acknowledgment in Mumbai where he met the leading lyricist of the Hindi music industry Shri Faaiz Anwaar. Soon, he vocalised the song "Parda Parda Hai Parda' from the movie "Amar Akbar Anthony".This impressed Faaiz Anwaar sahab.

Ever since then he did not look back, though he asserts, he had to go through a tough audition in front of Faaiz Anwaar and Music Director Jogeey Ghosh. During this audition, Rohit Akhouri's voice was tested on a variety of songs. Ultimately, he was able to clear the audition successfully. And, Faaiz Anwaar signed a contract with him for his debut album named as "Kai Khwahishein".This album was highly appreciated by the audience.

The music album was also complemented by the legendary and two times Filmfare awardee music director Padamshree Ravi who is on record having quoted the voice of Rohit Akhouri as "A BREATH OF FRESH AIR AFTER A LONG TIME."It is illustrated in "Kai Khwahishein."

Asked how long he had to struggle to gain a foothold in Bollywood, Rohit Akhouri said,"The journey was not easy.I had to struggle for five years. Finally, in 2017 I received an opportunity to sing for the Bollywood movie "Ajab Singh Ki Gajab Kahani."

Though he certainly deserves much more in the Hindi music world, the boy from Bihar-Jharkhand Rohit Akhouri said he has a strong sense of gratitude for Faaiz Anwaar." He has been my mentor", he said with tears rolling down his eyes. Rohit did not stop there as he added: "I have lots of regard for the great music director of our country Jogeey Ghosh sir".