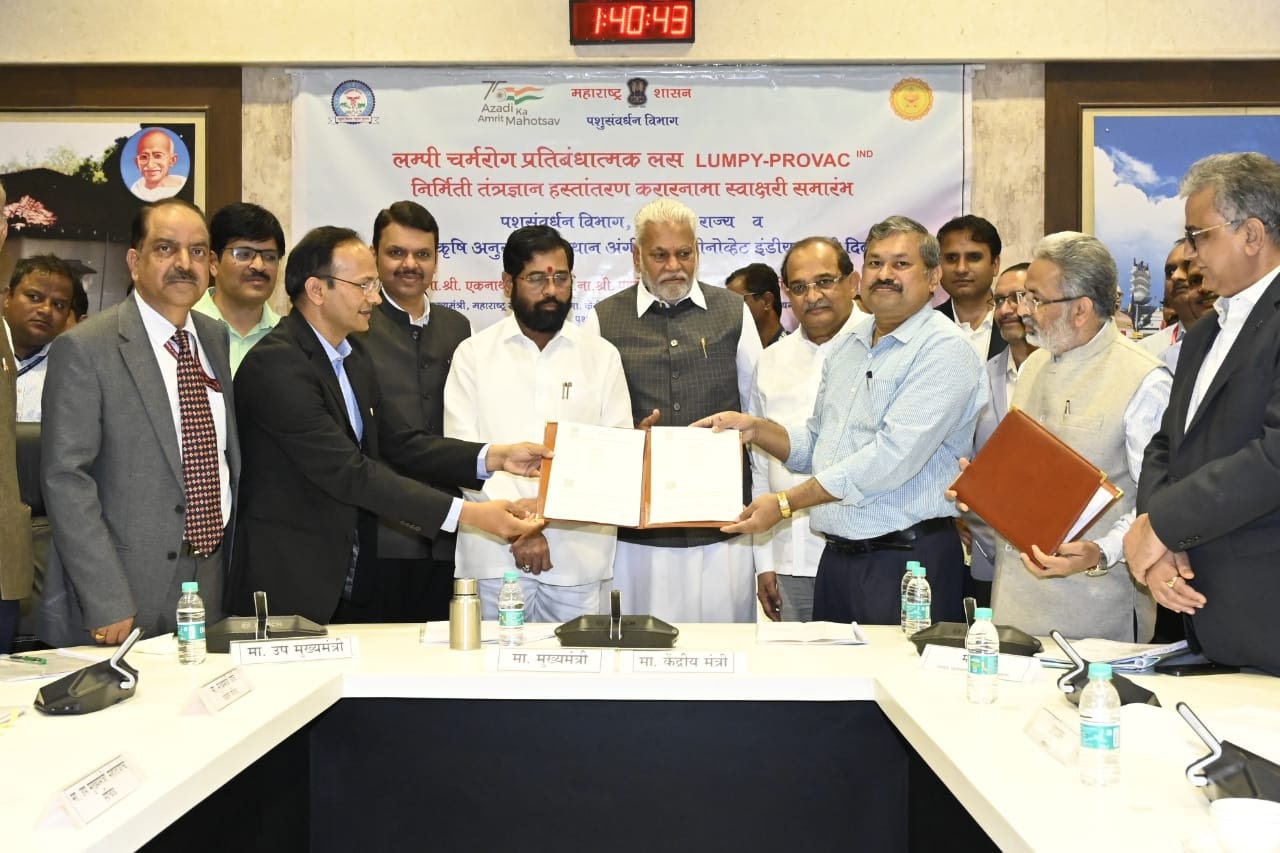 An MoU for the production of Goat Pox vaccine and "Lumpi-ProVac" vaccine was signed in Nagpur on 29th December 2022  in the presence of Shri Parshottam Rupala, Union Minister of Fisheries, Animal Husbandry and Dairying, the Chief Minister and Deputy CM of Maharashtra.

Shri Rupala praised the commendable effort put forth by ICAR in developing the indigenous vaccine Lumpi-ProVac for LSD. He further said that this MoU will also ensure large-scale production of the Goat Pox vaccine for the future needs of India's livestock sector. At present Goat, Pox vaccine is used for controlling Lumpy Skin Disease in animals and this has been proven effective against Lumpy.

He further highlighted the relevance of the technology and requested the IVBP, Pune to start manufacturing the vaccine at a large scale without any delay so as to make the vaccine available for use by the department for the help of the farmers by overcoming the disease.

Lumpi-ProVacind is safe in animals and induces LSDV-specific antibody-and cell-mediated immune response, besides providing complete protection against lethal LSDV challenge. Lumpi-ProVacind is used for the prophylactic immunization of animals against Lumpy Skin Disease, which illicit protection for about one year.  A single dose of the vaccine contains 103.5 TCID50 of live-attenuated LSDV (Ranchi strain). The vaccine is stored at 4°C. The vaccine must be shipped on ice and must be used within a few hours after reconstitution. The patent has been filed by the ICAR for the technology.

The dignitaries congratulated the IVBP, Pune, ICAR-NRCE, ICAR-IVRI and AgIn for the successful transfer of the technology. It is expected that the vaccine technology will definitely meet out the standard of the market and significantly provide a defence mechanism to control the devastating lumpy skin disease.

The Lumpy Skin Disease has been reported in India from 2019 while the first case was reported in the state of Odisha. After that, it spread to multiple states in the country. In 2019, the death of a large number of cattle has been reported from different states with high morbidity, especially in the North-West region of the country. The disease has been controlled and contained with the available Goatpox vaccine in the country. Considering the heavy production losses and mortality of a sizable number of cattle, ICAR initiated research on the development of an indigenous homologous vaccine against Lumpy Skin Disease.