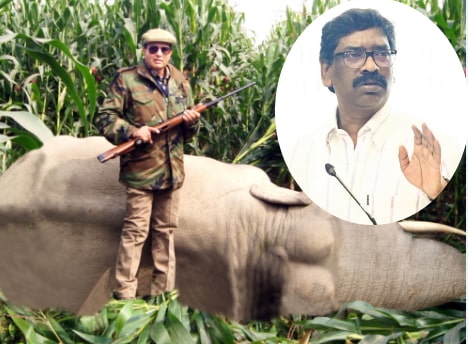 Two wild animals are causing untold misery to people. One is a leopard and another elephant. They had entered into populated villages in two separate districts leaving their homeland - the forest.

Statistically, the total geographical area of Jharkhand is spread over 79,714 sq.KM. Its forest area covers 23,605 Sq. KM. This means 29.61 percent is recorded as forest area.

Leopard hit area was located in 150 odd villages of Garhwa such as Bhandaria, Chiniya, Ranka and Ramkand block. In these villages, this wild cat had launched eight attacks. Four persons including three children were picked up and killed by this leopard.

The forest department has declared it as a “man-eater”. Fear of this wild man-eater cat was such that students had stopped attending schools and their parents preferred to remain locked inside their homes after Sunset.

Ask the Forest officer of Garhwa division Shashi Kumar why the forest department failed to even take picture of this man-eater leopard. And pat came to his reply that 50 cameras and a drone were operational.

“ We have not gained success so far”, said forest officer Kumar. Now, Hyderabad-based shooter Nawab Shafath Ali Khan has been called to use tranquilliser shooting mechanism to catch this man-eater cat.“ If it is not caught, we will shoot it and kill it”, Kumar says.

On another side of the state is Ramgarh district, the birthplace of Chief Minister Hemant Soren. In rural areas of Ramgarh, a group of 8-10 wild elephants had damaged homes, spoiled grain stores, and consumed cultivated grains and crops of scores of farmers. These elephants had crushed to death one farmer too.

Most affected villagers were either cribbing helplessly or were critical of JMM led government headed by the CM Hemant Soren.” Hemant ji has no time to think about our plight. He is busy defending himself from the ED and  BJP leaders who were grilling him on charges of corruption”, said one affected villager in Ramgarh.

Everybody knows that the forest cover has been reduced. Moreover, government-controlled forests are overridden by noxious weeds like Iantana and Parthenon forcing wildlife to stay out of the government-controlled forest and a wave of the anti-wildlife tirade is triggered by angry farmers and forest dwellers whose population had led to encroachment of vast forest areas.

“This is forcing wild animals like leopards and elephants to stray out of the forests, attacking cattle and humans”, thinks Nawab Shafath Ali Khan( his quote courtesy nawabshafathakikhan. com.

CM Hemant Soren has this task cut out to ensure this man-animal conflict is contained in the interest of both. Can Soren do this? The answer is anybody’s guess.