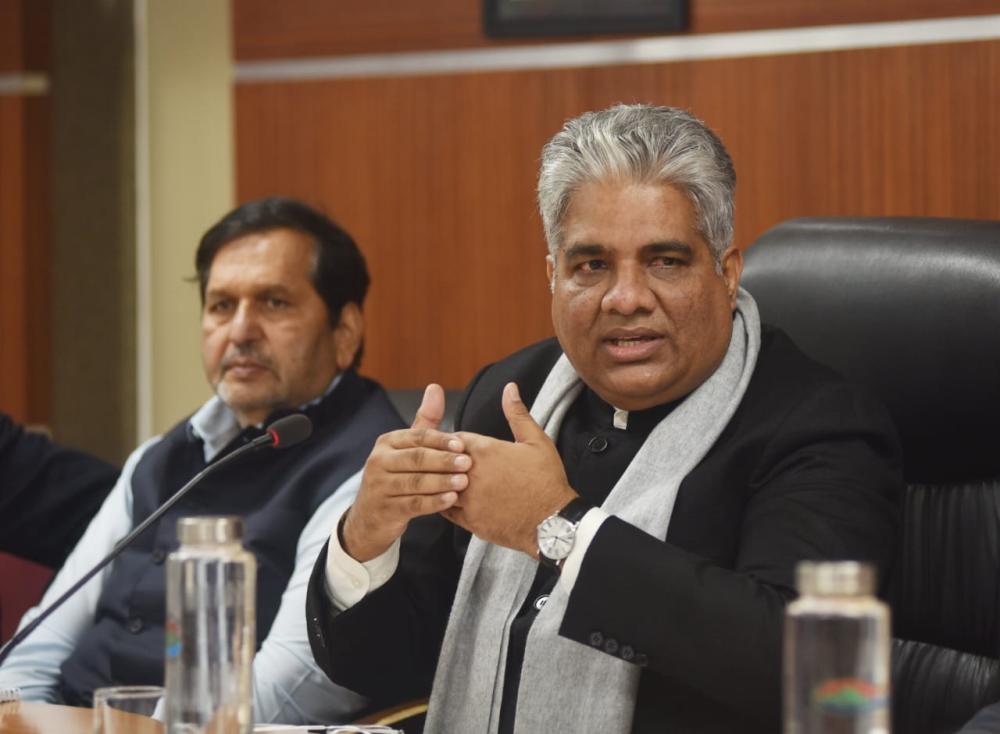 Ministry of Environment, Forest and Climate Change (MoEFCC) over the last few days has received several representations from different organizations representing Jain Samaj about the issues related to certain activities taking place at Parasnath Wildlife Sanctuary that have adversely affected the sentiments of followers of Jain Dharma.

The grievances mention the faulty implementation of provisions of the notification of Eco-Sensitive Zone of Parasnath Wildlife Sanctuary by Govt of Jharkhand. It has been mentioned that such negligence by state authorities has hurt their sentiments.

In this regard, a Meeting with different representatives of the Jain Community were invited by Union Minister Shri Bhupender Yadav for discussing the entire issue and also the possible solution. The representatives turned up in large numbers and spoke about the current situation at Sammed Shikharji and also about the demands of the community to maintain the piousness of the place.

The representatives were apprised that while the Parasnath WL Sanctuary was established by the erstwhile State of Bihar in 1984 under the provisions of the Wildlife Protection Act, 1972, the Eco Sensitive Zone(ESZ) was notified by the Government of India in consultation with the State Government of Jharkhand in 2019 under the provisions of Environment (Protection) Act, 1986.

Eco-Sensitive Zones act as some kind of "shock absorbers" to the Protected Areas by prohibiting, regulating and promoting activities around Protected Areas. ESZ notification is not intended to promote uncontrolled tourism, and definitely not to promote all kinds of development activities within a Sanctuary boundary. Declaration of ESZ is in fact to restrict or regulate activities SURROUNDING the sanctuary and, therefore, OUTSIDE its boundary.

It was mentioned that while there are ample provisions in the Management Plan of the Parasnath WL Sanctuary that prohibit the activities that have been said to be adversely affecting the sentiments of the Jain Community, Govt of India can also issue guidelines to the monitoring committee to address any particular issue, considering the sentiments of the Jain Community at large.

Shri Yadav specifically mentioned that this Ministry recognizes the established fact that Sammed Shikharji Parvat Kshetra is a sacred Jain religious place not only for the Jain community but for the entire country, and the Ministry is committed to maintaining its sanctity.

Consequent to the meeting it has been decided that State Govt of Jharkhand be directed to strictly enforce the relevant provisions Management Plan of the Parasnath Wildlife Sanctuary that specifically prohibit damage to flora or fauna; coming with pet animals; playing loud music or use loudspeakers; defiling sites or religious and cultural significance such as, sacred monuments, lakes, rocks, caves, and shrines; and sale of liquor, drugs, and other intoxicants etc; unauthorised camping and trekking etc on the Parasnath Hill. State Government of Jharkhand has been directed to strictly comply with  these provisions. The state government has also been directed to strictly enforce the ban on the sale and consumption of liquor and non-vegetarian food items on Parasnath hill as provided in the said OM.

Furthermore, in reference to the Eco Sensitive Zone Notification S.O.2795(E) dated 2nd August 2019, issued to protect a buffer zone beyond the sacred Parashnath Hill; the implementation of provisions of Clause 3 of the said Eco Sensitive Zone notification is stayed forthwith, including amongst others all Tourism and Eco-Tourism activities. The State Government is directed to immediately take all steps necessary to ensure the same.

In addition, for effective monitoring of the provisions of the above Eco Sensitive Zone notification under sub-section (3) of section 3 of the Environment (Protection) Act, 1986, the Central Government has constituted a Monitoring Committee under clause 5 of the said notification. The State Government is directed to have two members from the Jain community and one member from the local Tribal community as Permanent Invitees to this Monitoring Committee, enabling appropriate involvement and oversight by important stakeholders.