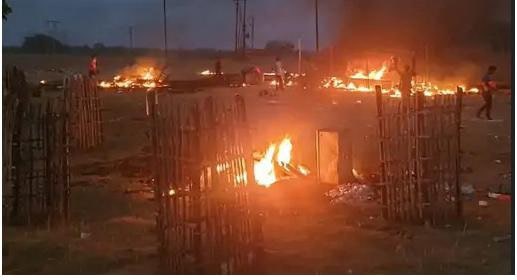 Maoists have entered capital city of Jharkhand.No joke this as they have left behind their acts of violence in the form of burnt Hyvas along road side.

In any case, this has raised alarm bails among people since this incident has taken place after quite some time since security forces had broken their base in Jharkhand.

The re -entry of Maoists into areas of Ranchi is mainly attributed to failure of the state police to contain them.

Reports based on eye witness accounts, state that armed Maoists had demanded ransom from the stone chip owner and had threatened him with dire consequences if ransom was not paid.

Since this owner preferred not to pay ransom, they launched attack against him, one police officer said on condition of anonymity.

“The guard of the stone chip mine was badly thrashed and then they snatched his mobile phone before disappearing,” said the same police officer.

Not the least,about 15 armed Maoists had stoned the ITBP campus as well. “First, they put revolver on the neck of the stone mines guard, enquired the address of its owner and them burnt two Hyva trucks”, said a report published by TV channel News 11.

The police were informed of this incident this morning. No arrest was made in this case till now.