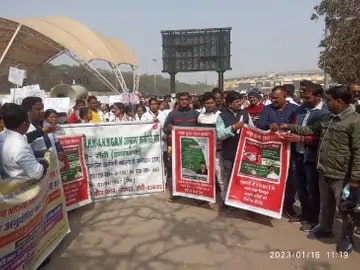 *Protesters comprising contractual staff of the state health department who were demanding regularisation of their service at Morahabadi Maidan, Ranchi on January 16, 2023.

Five health staff of the state government were mildly injured in a clash between their agitating colleagues and the police in Ranchi on Monday.

The protesters comprising contract personnel of the state health department wanted to meet CM Hemant Soren. In view of their agitation, the police had put up barricades blocking entry into residential areas connected with the official residence of the CM and Governor, Jharkhand.

However, when the protesters tried to break the barricade, the police had to use force to maintain law and order. However, in the ensuing light lathi charge, five contract staff were injured.

Their union leader Juhi Minz said that one of her colleagues had got “serious injury” in his leg. An eyewitness account has it that protesters had gathered at Morahabadi maidan. From they marched in the form of a procession up to the Raj Bhawan( Governor’s House).

At Raj Bhawan, many of them shouted slogans. As a group of them broke the barricade, the police intervened resulting in the injuries of five protesters.

The protesters have been on an indefinite strike demanding regularisation of their service. They were demanding CM Hemant Soren to allow their five-member team to meet him and apprise him of their demand.

They criticized the Hemant Soren government for making promises, but not fulfilling one of them.” We are being cheated”, Minz said.

The protesters had come to Ranchi from across the state. Another protester said that the Hemant Soren government had promised to regularise their service three months after coming to power.” Today when this government has completed three years, it has not fulfilled its promise”, he cribbed.

They numbering 8000 contractual staff of the state health department )have threatened to proceed on indefinite strike.

Their demand is to make amendments in Para Medical Rules 2018 to make the service of all para-medical staff regular like what the department had done in 2014.