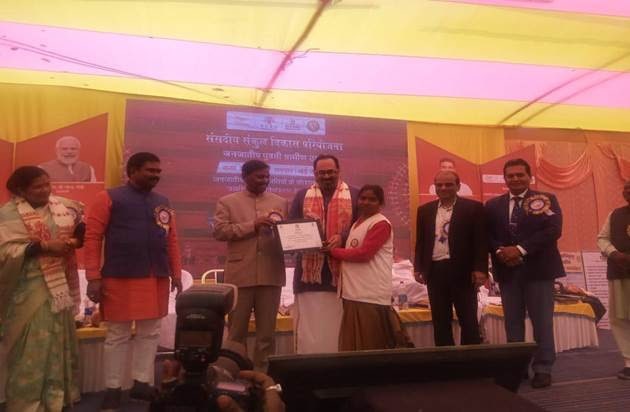 Union Minister of State for Skill Development & Entrepreneurship and Electronics & IT, Shri Rajeev Chandrasekhar today termed skilling as a gateway to opportunity and the Government’s endeavor has been to ensure skill opportunities for all in every remote corner of the country while addressing the felicitation programme of the Grameen Udyami Project held at Gumla.

Shri Chandrasekhar said that the skills are an important part of New India’s future growth. Our effort has been to provide skilling, keeping in mind the local opportunities and resources available. This will go a long way in reducing migration to cities and also uplift of the local economy, he added.

He emphasized that Prime Minister Shri Narendra Modi’s vision for an Atmanirbhar Bharat (self-reliant) travels through Atmanirbhar villages and Atmanirbhar Panchayats, and said Atmanirbharta is not possible without the contribution of our tribals (Jan Jatiya).

Over 200 tribal women who had completed their skills training under Phase 3 of the Project, were awarded their certificates at the programme. Union Minister of Tribal Affairs, Shri Arjun Munda and Shri Sameer Oran, Member of Rajya Sabha were also present on the occasion.

Shri Chandrasekhar later met a group of Fellows working under the Mahatma Gandhi National Fellowship (MGNF) scheme from Jharkhand and Tamil Nadu and shared with them Prime Minister Modi’s vision about skilling. He said the District Skill Development Plans must focus on creating opportunities for jobs and entrepreneurship for the uplift of the local economy and reflect the vision of Naya Bharat, Naye Avsar, Nayi Sammriddhi.

Shri Rajeev Chandrasekhar arrived in Ranchi earlier today and visited the holy Manokamna Siddhi Durga Mandir in Lohardaga. He also paid homage at the memorial of Shaheed Devnarayan Bhagatof the Jharkhand police who was martyred fighting against the Naxalites in 2012.