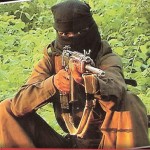 wo villagers, identified as Rama Mahato, a farmer and his nephew,Sonu, residents of Murkunda village in Gumla were shot dead in their house this morning by a group of 15-20 armed men.

The police suspect the crime was linked with a murder in the village some time ago. Sonu was accused in the murder case. “It is possible, to avenge this murder,the Maoists killed them”,said a police officer.