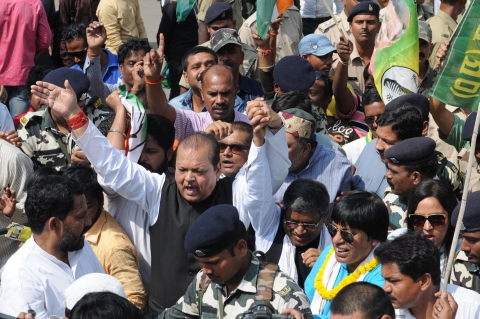 The down to dusk bandh called by Opposition parties passed off peacefully with no major incident of violence reported from any place in Jharkhand on Monday.

Most schools,colleges and market places remained closed.The traffic was thin as the private and public transport was off the road due to the bandh.
In the evening,many shops and market places were opened and the traffic in Ranchi city was coming to normal.However,the government offices,banks and offices of companies,both private and public remained open across the state.

In Ranchi,the Congress leaders including ex Union Minister Subodh Kant Sahay,accompanied by his supporters,marched in the street.They were spotted fighting with the policemen who tried to prevent them break the law and order.However,there was no clash between the two.

The bandh was called to protest against multiple factors including Barkakana police station which killed four persons and Police firing in Khunti on Saturday resulting in death of a person.Different political parties had given instructions to their district units to make all out efforts to ensure that the bandh has maximum impact on the government.

JVM-P chief Babulal Marandi, who visited the victims of Khunto police firing said tribals cannot remain silent when the government is planning to take away their lands. He claimed the Khunti violence was a result of policing failure.

“Policemen had warned vehicle owners in Khunti not to lend their vehicles to protestors. It is undemocratic to deprive people from participating in protests. The protestors turned violent only after they were stopped from going to Ranchi. It is equal to killing democracy,” said Marandi.