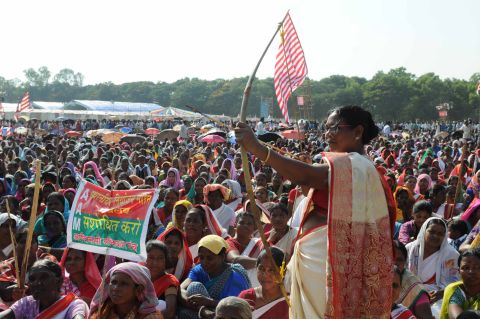 The Aakrosh rally organised by tribals under the banner of Jharkhand Adivasi Sangharsh Morcha at Morahabadi Maidan in Ranchi on Saturday was attended by hundreds of tribals in Jharkhand.

Though the police and the state adminstrative officers were deployed in strength to maintain law and order,the traffic along the highways linking Ranchi with Khunti,Lohardaga,Simdega and Gumla was paralysed.

Worse,attempt by the police to prevent unrest was foiled by the tribals.Some of them even launched attack on senior police personnel including Khunti’s Additional SP(Operation)Anurag Raj, DY.SP(Headquarter)Hardev Prasad Laguni and his bodygurad and In-charge of Ardki Police station Hardev Prasad.

“They were tied with a rope and pulled towards the forest.While they were pulled and taken to forest area,they were thrashed and beaten up with sandles”,said an Eyewitness.The violent incident took place near Syko in Khunti where bandh was observed and tribals raised protest.

Reports said,in defence,the bodyguard of the Dy.SP Nagendra Sharma opened fire and carried “15-20 rounds of fire”.As a result,one person died and over 8 others were injured.Among the injured were two women.

The agitating tribals complained that they were not allowed to move out of Khunti to attend the Aakrosh rally at Morahabadi Maidan in Ranchi where the rally ended with leaders addressing hundreds of tribals.Many of them were spotted carrying conventional weapons.

The rally was organised in protest against the Raghubar Das government’s ‘reported’ move to acquire tribal land for development purposes by amending the CNT Act 1908 and so on.Most of the tribals participating in the rally were Christian tribals who were considered pro Congress and Jharkhand Mukti Morcha.