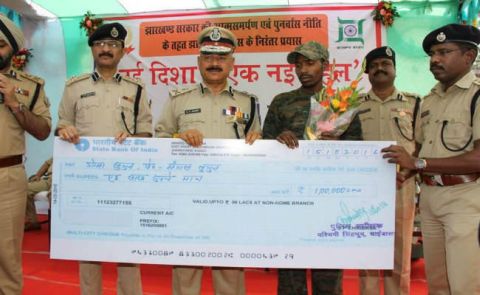 Yet another success came to the cops in Jharkhand on Monday when nine Maoists surrendered before Director General of Police, D.K.Pandey inside Police Headquarter office premise in Ranchi.

All these Maoists belonged to the banned Naxalite outfit-People’s Liberation Front of India.They have been in the PLFI since 2013.

Talking to www.jharkhandstatenews.com,they informed that they had joined the PLFI under ‘pressure’ put up by two PLFI leaders-Amar Gudia and Mangala Lugun.

Since they continued to exploit the people,they said they preferred to return to the mainstream.”Had we not joined the outfit,they would have killed us and our family members”,said Lal Behari Singh who had joined the PLFI in 2013.

“I had joined to deal with the family dispute.But fed up with the crime after crime committed by the PLFI cadres,we decided to withdraw ourselves and quit PLFI”,said Singh.

DGP DK Pandey greeted and awarded them under the state government’s ‘surrender policy’.”We welcome them.We believe that they took the right step by surrendering”,said the DGP.