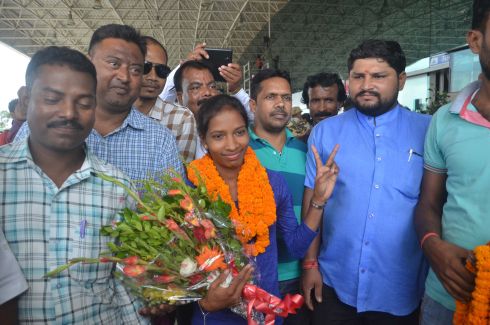 She was the only woman hockey player from Jharkhand who represented India in the Rio Olympics.

The Team did not win any medal.However,when Nikki Pradhan landed in Ranchi and came out of the Birsa Munda Airport,she was greeted by Jharkhand Olympic officials and supporters.

Nikki,22-year-old midfielder,whi is considered a deep defender from Khunti, has scripted a chapter in the history of Jharkhand hockey after she was included in the 16-member squad for Rio Olympics – which also marked the return of Indian women’s hockey in the event after 36 years.

“I am happy that the team did its best.I did my best.But sad thing is the team failed.We will work hard and try to get medal in the next Olympics in Japan”,she said.