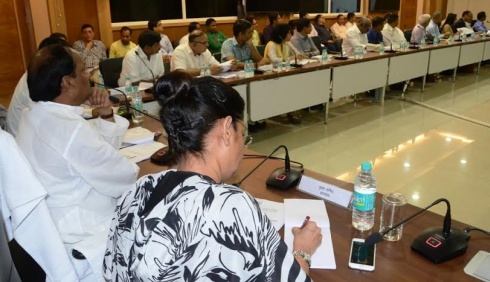 Jharkhand Chief Minister Raghubar Das on Monday directed the state based private and public companies to transfer one of its two percent sum meant to be spent under Corporate Social Responsibility to the account of the CSR Council(CSRC) account.

More,the CM directed that atleast half of the sum not spent by it during 2015-16,should be transferred to the same account.He said that a special wing has to be set up to monitor the fund.”This wing will comprise the representative of the company as well’,he said.

The CM said that in case the company is inclined to know about the details of its CSR fund,it can get them from the state government.”The work will be done in a transparent manner”,said the CM in a meeting of the CSR Council inside the Project Bhawan on Monday.

*Picture shows Jharkhand CM Raghubar Das presiding over a meeting of the CSR Council in Ranchi on August 1,2016.Sitting on his right is Chief Secretary Raj Bala Verma and in front(L and R)are representatives of companies.