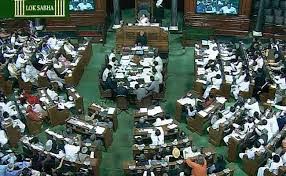 The Lok Sabha on Tuesday witnessed Opposition led by Congress and JMM accusing the ruling BJP of alleged coercion and threats in the recent biennial polls to the Rajya Sabha to ensure victory of its candidates in Jharkhand.

All these Opposition leaders sought the setting up of a House Committee to probe into a CD that allegedly contains audio recordings of a senior IPS officer threatening the husband of an opposition MLA to get her to vote in favour of a candidate of the ruling party.

The issue was raised during Zero Hour by JMM’s Sanjiv Kumar who alleged that on the eve of polling, two opposition MLAs were harassed in some old cases while a JMM MLA was arrested in a petty case to prevent him from casting his vote.

“While other MLAs lodged in jails were allowed to cast vote, the three opposition legislators could not, leading to the victory of the ruling party candidate by one vote”, Kumar claimed.

“Without naming anyone, he said the ruling party used allurements as well as threats to win over opposition MLAs”,said the JMM MP.

He claimed that a CD has surfaced purportedly showing how an Additional Director General of Police coerced and threatened the husband of an opposition MLA.

In fact,the CD allegedly contains conversation between the officer and Yogendra Sao, husband of Congress MLA Nirmala Devi. It also contains talks between Sao and the Chief Minister’s political adviser.

Maintaining that a copy of the CD will be made available to the Union Home Minister, he demanded action against the police officer.

Leader of the Opposition Ghulam Nabi Azad also demanded sacking of the police officer involved, alleging that it had become a modus operandi under the present dispensation to use threats and coercion.