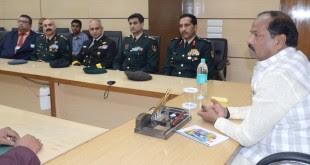 Incidentally,Defence Minister Manohar Parrikar had on January 23 laid the foundation stone of Jharkhand Raksha Shakti University and said that it was needed to gain strength and intelligence to deal with the cybre crimes.

The Cabinet meeting today took a number of other decisions.Among them,the significant ones were as follows.

One,approval of 5075 posts of Principals and Post Graduate Trained teachers to teach the Class IX-XII students of the Kasturba Gandhi Girls Residential Schools in the state.

Two, Jharkhand Space Application Centre to carry out the work related with GIS:GPS based mapping of all rural roads built in the state under the Pradhan Mantri Gram Sadak Yojna and other schemes.