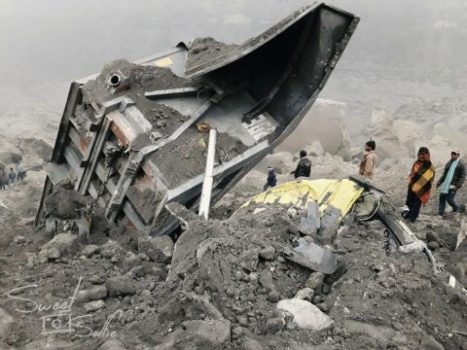 Shows entry site of Latmatia mines where coal mines had caved -in Godda,Jharkhand.

Twelve bodies were recovered and more than two dozen persons were lying trapped inside private coal mines Lalmatia in Godda in Jharkhand where the mud had collapsed causing the disaster night at around 8 pm on Thursday.

More than 24 hours after the incident,12 persons were recovered dead and over 40 of them were trapped inside the mines,a report reaching Ranchi claimed.Toll expeccted to rise.

Responding to the mine collapse case,the Raghubar Das government in Jharkhand had announced a compensation of Rs 2 lakh to the deceased and Rs 25,000 for the injured person.

The mine disaster took place because a heap of mud had collapsed at the entry point,it is learnt.Apart from nearly 50 miners who had got trapped following the mine-cave in incident,more than 40 vehicles were reportedly inside.

The rescue work was continuing and delay in removing the dust and earth from the site is expected to raise the number of casualty.