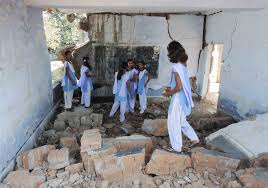 There are 6,275 Government elementary schools in Jharkhand.None of these schools have a toilet for girls.

Also,3,772 schools in this state lack toilets for boy students. Similarly, 3,458 schools do not have drinking water facilities for the students and 28,864 schools are without playground in the State of Jharkhand.

Total 4,99,595 schools in the country are running without playground for students, while 9,07,585 posts of teachers are vacant in different states of the country.Prakash Javadekar, Minister for Human Resource Development stated in Rajya Sabha on July 21, 2016, in reply to the question raised by member of Rajya Sabha Parimal Nathwani.

The Minister informed that under the Swachh Vidyalaya initiative 4,17,796 toilets were built in 2,61,400 elementary and secondary government schools thus ensuring that every government school has functional separate toilets for girls and boys as on 15th August 2015.

The minister stated that the Central Government supports State Governments and Union Territories Administrations for creation and augmentation of infrastructural facilities in government elementary schools under Sarva Shiksha Abhiyan (SSA). Under SSA, posts of additional teachers have been sanctioned to States and UTs to maintain the Pupil Teacher Ratio in the government schools as per the RTE norms, he said.

He added that since the inception of SSA in 2001 till March 31, 2016, 3.64 lakh new elementary schools, construction of 3.11 lakh school buildings, and 18.61 lakh additional classrooms, 2.38 lakh drinking water facilities, 10.14 lakh school toilets and 19.48 lakh teachers posts have been sanctioned to States and UTs.