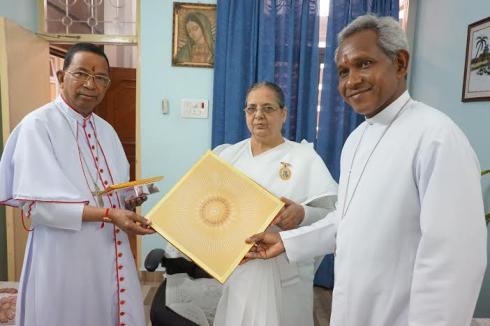 Though the festival of Raksha Bandhan is on August 18,the Brahmakumari Nirmala Bahan has started tying Rakhi.

Also,she not only handed over to the Cardinal of the Roman Catholic Church a memento showing the theme of the Hindu God Lord Shiva,but put up a red dot on the centre of the forehead of Cardinal Toppo who thanked her for this.

As it is, Rakhi ceremony is celebrated every year in the month of August-(called Shravan according to the Hindu calendar). This ceremony takes place on the full moon day of Shravan.

As per the Hindu tradition,Raksha Bandhan festival is an effort to strengthen the bondage between siblings.On this propitious day, a sister ties the thread of Rakhi on her brother’s wrist so that her brother can enjoy prosperity in life.

On the other hand, the brother promises to protect his sister from all possible difficulties of life.Rakhi is considered an emblem of love and protection. “The sacred thread of Rakhi acts to bond brothers and sisters and it intends to signify a harmonious relation between people”,states a Hindu Pandit.

But being a woman,Brahmakumari Nirmala Bahan ties Rakhi on the wrist of both men and women belonging to different communities and religions,wishes them a prosperous life every year.