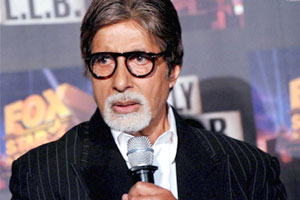 How you describe a man who pinpoints his own mistake and regrets.Many say he must be a nice guy.So is Big B.

Seven years ago ,recalls Amitabh Bacchan,he had committed a mistake in one of the sequences in 2005 Black, in which he had played a teacher called Debraj Sahay.

Eight years later,he has not forgotten his mistake or so it seems.Becaause in a comment he had posted on his blog srbachchan.tumblr.com,he said:”…I was asking about the fault in my performance, in that scene, and not the other factors. And here is what the fault was.”

What was the fault?”I needed to feel around in my other pockets to ascertain where my glasses were, instead of my hand directly going to the pocket. For someone who is soon getting into the symptoms of Alzheimer’s, where patients forget where and what they do, it was incorrect of me to go straight to my pocket,” writes super star.

“Aah! still cringe every time I think of the mistake, or see it on replays! Damn! I am such a rotten actor,” posted Big B.