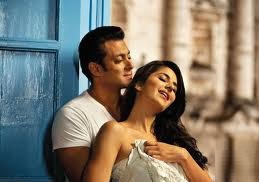 His fans transcend the boundaries of India and Pakistan.But while in India Salman-Katrina’s Ek Tha Tiger had netted big sum of Rs 32 crore on the first day,it is reported to have run into trouble in Pakistan.Reports say that this latest film of the two hot Indian actors may not hit the theatre in Pakistan.Though the theme of Ek Tha Tiger was taken as anti Pakistan,it was to be screened for the censor board members there.

The latest buzz is that this film failed to convince the Pakistani Board members to allow the film to be run in theatres in their country.This may cost the producers dearly now when the Eid is just around the corner.In any case Salman and Katrina have already hit the jackport.