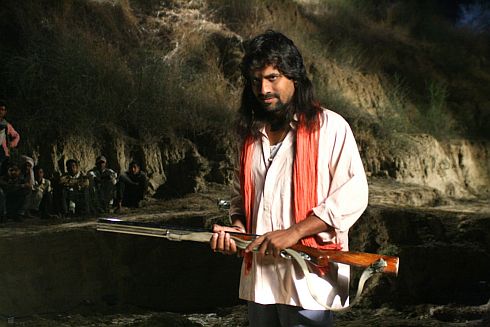 It’s a film on the backdrop of dacoits.

In a review in the bollywood hangama.com,it is said that the film revolves aound the Beehad of Chambel river valley.
This valley encompassing the ravine areas of Uttar Pradesh, Madhya Pradesh and Rajasthan, are known as home to dreaded dacoits of India.

“ Feared dacoits like Maan Singh, Putil bhai, Malkhan Singh, Mohar Singh etc are all by product of this river valley region called Beehad. This trend still continues. However, today they have lost their sheen of self righteousness and become sort of mercenaries.

Slowly and steadily their practice turned into kidnapping and except for a few of them, others turned into a sort of mercenaries. The film, Beehad – The Ravines, deals with this mix of dacoits from 1975 to the year 2005. After a research of five years, this film went on floor and was shot at actual locations of Beehad in Chambal Ravines”,said the review.

“Initially Beehad nurtured extremist like Shriram, Lalaram, Fakkad, Mustakeem etc who terrorized the entire Chambal valley. Later Shriram Singh guided Vikram Mallah and Phoolan Devi into this art of terror and they ignited the valley with religious conflicts. Result of this was Kusuma Nain’s birth as a dacoit who later killed Vikram Mallah. While Phoolan Devi vindicated her rape by killing 23 innocent people in Behmai village after her marriage to Maan Singh, it was Kusuma Nain who became the most evil and feared dacoit. Along with Shriram and Lalaram, Kusuma Killed 15 Mallah at mai aasta. Later she surrendered to police and is waiting judgment in Orai Jail.

Today Chambal valley does not have any real time dacoit, but the name beehad still evokes fear. Film Beehad – The Ravines is the story of these dacoits, their social exploitation, their taking to arms against this injustice and their reign of terror against opposite sects and castes”,said the same review on this film set to be released on February 15.