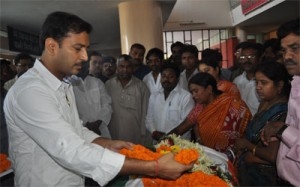 All Jharkhand Students Union Supremo Sudesh Mahto today exhorted women to wake up, rise and shine and actively participate in the political affairs of Jharkhand.

“This state will march ahead only when the system facilitates women to move forward”,said Mahto who was addressing a huge gathering of women at the Morahabadi Maidan in Ranchi today.

The meeting organized under the banner of the party’s programme-“Mahila Panchayat”-attened by more than 10,000 women from across Jharkhand,symbolized emergence of AJSU as a popular regional party among women in this state.

As of now,the party is represented by six MLAs in 81-member Jharkhand Assembly.With Mahto silently working to oil the party machine by involving the youth,women and ex Maoists such as Yugal Pal who had last year quit the JMM and joined his bandwagon,AJSU is aiming to increase its tally in the coming Assembly polls.

Mahto in an article under the title-Shiksha Ke Sudhar Se Sudharegi Mahilawao Ki Zindagi(By spreading literacy,the status of women can be improved)published by Prabhat Khabar on March 24,page 2-gave statistical profile of the plight of women and child in Jharkhand.These are as follows:

In Jharkhand,women’s total population – 1.69 crore;sex ratio- 947;51 percent children not vaccinated;70 percent child without preventive vaccines;54 percent of child in 3 years group malnourished;70 percent women in the age group of 15-45 suffered from anemia;70 percent women unaware of the dreaded diseases like HIV/AIDS;65 percent families don’t use any form of family planning;64 percent pregnant women don’t undergo any test before delivering the baby;46 children per 1000 die before attaining one year of age.Sad indeed.

By picking their issues,Mahto has made a solid effort to gain popularity popularity among them.”Eh Jharkhand Ka Bhavishaya Hai”(He is future of Jharkhand),remarked a non tribal woman.But many tribal women were spotted in the meeting.