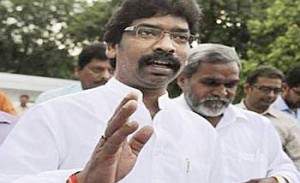 By making two statements on the issue of domicile in a day,Jharkhand Chief Minister Hemant Soren has courted an old controversy.

A day after winning over the vote of confidence in the Jharkhand Assembly,Soren made two statements on the issue of domicile in Ranchi on Friday.

In the past,this issue had created a divide between the Adivasis and non Adivasis in early 2002’s when BJP’s Babulal Marandi was the Chief Minister.Two persons had died a number of others were injured in group clashes in Ranchi.

It again rocked the Arjun Munda government last year when JMM was its ally.It surfaced especially when Soren demanded an employment policy based on the ‘locals’ whose ancestors owned lands to the effect that their names were mentioned in the Khatiyan(land records) dating back to 1932.Subseqently,Arjun Munda government fell.

Against this backdrop,when he was asked for his reaction on domicile after he became the CM on July 13,Soren said that his stand on it had not changed.’Whoever hold the Khatiyan is a Jharkhandi”,said Soren.“Whether this Khatiyan dates back to 1932,1962 or 1800.”

But aware of its adverse implications,Soren changed his stand in the evening saying;’What I had said was the stand of my party.Now I am the Chief Minister.Apart from my party,other allies were supporting the government.What ought to be the cut of date for deciding the domicile of a resident,will be decided amicably by all of us”,said Soren in a statement last evening.

His clarifications not withstanding the issue of domicile is likely to heat up politics in the time to come.This is expected mainly because elections were round the corner.The politicians had their own stakes.To mobilise their own support base,they,cutting across party lines,may rake it up,leaving other issues of governance and development at the back burner.